Gadsden's "Between North and South"

Brett Gadsden, an Associate Professor of African American studies at Emory University, has recently Between North and South: Delaware, Desegregation, and the Myth of American Sectionalism, in the Politics and Culture in Modern America series at the University of Pennsylvania Press, which explains: 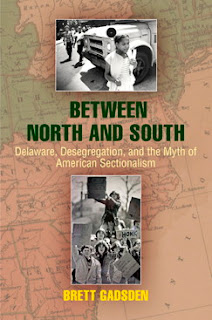 Between North and South chronicles the three-decade-long struggle over segregated schooling in Delaware, a key border state and important site of civil rights activism and white reaction. Historian Brett Gadsden begins by tracing the origins of a long litigation campaign by NAACP attorneys who translated popular complaints about the inequities in Jim Crow schooling into challenges to racial proscriptions in public education. Their legal victories subsequently provided the evidentiary basis for the Supreme Court's historic decision in Brown v. Board of Education, marking Delaware as a center of civil rights advancements. Gadsden's further examination of a novel metropolitan approach to address the problem of segregation in city and suburban schools, wherein proponents highlighted the web of state-sponsored discrimination that produced interrelated school and residential segregation, reveals the strategic creativity of civil rights activists. He shows us how, even in the face of concerted white opposition, these activists continued to advance civil rights reforms into the 1970s, secured one of the most progressive busing remedies in the nation, and created a potential model for desegregation efforts across the United States.

Between North and South also explores how activists on both sides of the contest in this border state—adjacent to the Mason-Dixon line—helped create, perpetuate, and contest ideas of southern exceptionalism and northern innocence. Gadsden offers instead a new framework in which "southern-style" and "northern-style" modes of racial segregation and discrimination are revealed largely as regional myths that civil rights activists and opponents alternately evoked and strategically deployed to both advance and thwart reform.

The TOC is here.
Here are some blurbs:

"In this provocative and richly detailed study of school desegregation in Delaware, Gadsden provides powerful insights about American history writ large by exposing the artificial binaries that shaped law and politics during the civil rights era: southern versus northern race relations, de jure versus de facto segregation, urban versus suburban boundaries, and even the conservative versus liberal roles in white backlash against court-ordered busing."—Matt Lassiter, University of Michigan

"Brett Gadsden's Between North and South tells the long history of school desegregation in Delaware—a state whose remarkable role in Brown v. Board of Education is largely forgotten. Gadsden insightfully examines the spatial and political dynamics that shaped the campaign for educational equality during the 1960s and 1970s, an era of backlash against 'forced busing.' In 1974, when courts, legislatures, and citizens across the country turned against school desegregation, Delaware gave rise to the nation's first metropolitan school desegregation remedy. Gadsden makes sense of this anomaly, skillfully explaining what made Delaware different. The book is a must-read for students of race, education, and the law."—Tomiko Brown-Nagin, author of Bancroft-Prize Winning Courage to Dissent: Atlanta and the Long History of the Civil Rights Movement.
Posted by Dan Ernst at 10:40 AM