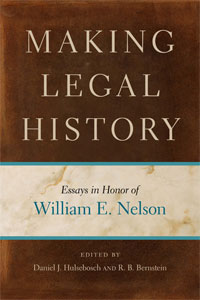 One of the academy’s leading legal historians, William E. Nelson is the Edward Weinfeld Professor of Law at New York University School of Law. For more than four decades, Nelson has produced some of the most original and creative work on American constitutional and legal history. His prize-winning books have blazed new trails for historians with their substantive arguments and the scope and depth of Nelson’s exploration of primary sources. Nelson was the first legal scholar to use early American county court records as sources of legal and social history, and his work (on legal history in England, colonial America, and New York) has been a model for generations of legal historians.

This book collects ten essays exemplifying and explaining the process of identifying and interpreting archival sources—the foundation of an array of methods of writing American legal history. The essays presented here span the full range of American history from the colonial era to the 1980s.Each historian has either identified a body of sources not previously explored or devised a new method of interrogating sources already known.The result is a kaleidoscopic examination of the historian’s task and of the research methods and interpretative strategies that characterize the rich, complex field of American constitutional and legal history.

"These essays epitomize the deep and broad impact that William Nelson has had on the writing of American legal history. In them we see his passion for archival research and his creative application of new sources and new ideas. Nelson has not so much transformed a field as shaped an entirely new one and inspired one of the most vibrant intellectual communities in academia today."
-David Thomas Konig, Washington University in St. Louis

“It is, literally, impossible to overstate Bill Nelson’s importance to the field of legal history, whether as a result of his prodigious scholarly output, his generous mentorship of young scholars, or his creative institution building. But his influence in all these roles is displayed in this wonderful collection of essays by many of America’s leading legal historians (all former Goliebs who cut their teeth under Bill’s incomparable tutelage)."
-Larry Kramer, President, William & Flora Hewlett Foundation

"Making Legal History is not just a tribute to one of the most productive and creative legal historians in the United States, but a fundamental contribution to our understanding of this country’s legal history. These fine essays cover a wide chronological and topic range, and provide the reader with an understanding of just how far we have come in understanding the role of law in American society under Bill Nelson’s intellectual influence. The book is a fitting tribute to a great scholar, and a boon to students of our legal past."
-Stanley N. Katz, Princeton University

“Over the past forty years, William Nelson has played a crucial role in the amazing growth of the field of legal history  His significance comes in the first place from his prodigious scholarship.  But as important have been the institutions he has founded and the young scholars he has nurtured.  He has been and continues to be a model of the generous and creative senior scholar.  The Golieb Fellowship at NYU School of Law, an institution he has long led, has offered a home to two generations of the best young legal historians, as they made transitions into distinguished careers.  In the pages of Making Legal History, one finds a wonderful offering of some of their best work.”
-Hendrik Hartog, Princeton University

Table of contents after the jump.

1. The Landscape of Faith: Religious Property and Confiscation in the Early Republic
Sarah Barringer Gordon

6. The Long, Broad, and Deep Civil Rights Movement: The Lessons of a Master Scholar and Teacher
Tomiko Brown-Nagin

7. Counting as a Tool of Legal History
John Wertheimer

8. A Mania for Accumulation: The Plea of Moral Insanity in Gilded Age Will Contests
Susanna L. Blumenthal

Bibliography of the Scholarship of William E. Nelson