We’ll be posting notices of a few legal history related books published this year that only recently have come to our attention.  The first is Robert M. Fogelson’s The Great Rent Wars: New York, 1917-1929 (New Haven: Yale University Press, 2013).  Here’s the publisher’s squib: 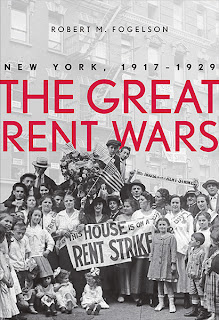 Written by one of the country’s foremost urban historians, The Great Rent Wars tells the fascinating but little-known story of the battles between landlords and tenants in the nation’s largest city from 1917 through 1929. These conflicts were triggered by the post-war housing shortage, which prompted landlords to raise rents, drove tenants to go on rent strikes, and spurred the state legislature, a conservative body dominated by upstate Republicans, to impose rent control in New York, a radical and unprecedented step that transformed landlord-tenant relations.

The Great Rent Wars traces the tumultuous history of rent control in New York from its inception to its expiration as it unfolded in New York, Albany, and Washington, D.C. At the heart of this story are such memorable figures as Al Smith, Fiorello H. La Guardia, and Oliver Wendell Holmes, as well as a host of tenants, landlords, judges, and politicians who have long been forgotten. Fogelson also explores the heated debates over landlord-tenant law, housing policy, and other issues that are as controversial today as they were a century ago.

Writes Elizabeth Blackmar, Columbia University, author of Manhattan for Rent, 1785–1850: "A powerful history of a remarkable contest over the governance of the housing market in New York City from World War I to the eve of the Great Depression. A highly original contribution to our understanding of American urban politics."

The contents and a preview are here.
Posted by Dan Ernst at 11:00 AM