Our friends at Quid Pro Books have drawn our attention to the reprinting of two quite notable books.  The first is Solomon Northup’s Twelve Years a Slave, in a very readable font and with such images “as the manifest of slaves from the ship Orleans that carried Northup to New Orleans, and the plantation house Northup built.”  Writes the press of the book: 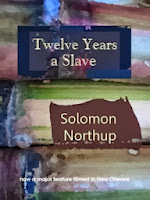 The classic and compelling narrative of the kidnapping, slavery, and freedom of a free man of color wrested to rural Louisiana. Lured to the nation’s capital by the prospect of work, Solomon Northup, a free man born in New York, is kidnapped and sold into slavery. He spends the next twelve years in bondage, primarily on a plantation in Louisiana, along the Red River. Solomon was a witness to the inhumanity of the institution of slavery, the abuses suffered at the hands of cruel masters, and working conditions and the daily lives of his fellow slaves.

Throughout his enslavement, Solomon never reveals his true identity as a free man, kept secret for fear of brutal physical consequences and the possibility of being traded to a plantation further away from society. Eventually enlisting the aid of a white man from Canada employed on the plantation, Solomon strives to realize his dream of returning to Saratoga, New York, to his wife and now-grown children.

First published in 1853, Twelve Years a Slave is a stark description of that “peculiar institution” that drove the southern economy and bitterly divided Americans. Solomon Northup’s narrative is perhaps one of the most important–and compelling–first-hand accounts of slavery that exists. The new edition features additional interesting and rare images relating to Solomon Northup, such as the actual “manifest of slaves” from the ship that brought him in chains to New Orleans. The paperback uses clearer, more legible formatting and font than do typical reproductions of this book, and the eBooks include the additional images and active Contents, linked notes, and proper digital presentation–also rare among the usual eBook editions of this work.

The second book is a one-volume abridgment of Joseph Story’s Commentaries on the Constitution of the United States (1833), with an introduction by Penn Law’s Kermit Roosevelt III:

Justice Joseph Story’s famous and influential review of the origins, influences, and early interpretations of the Constitution is now presented in the author’s own 1833 Abridged Edition—considered the most useful and readable version of this important work, written by the Supreme Court’s youngest member. No other ebook version offers the accessible abridged form, and in proper digital format no less. The new hardcover and paperback use modern, legible font. Plus in print or digital, this edition adds an extensive 2013 introduction by Kermit Roosevelt III.

One of the United States’ most influential legal scholars and jurists wrote his landmark treatise before the Civil War, describing federalism, states’ history, freedoms, and constitutional structure. He abridged it into this usable book. Adding a new and informative Foreword by constitutional scholar Kermit Roosevelt III of the University of Pennsylvania Law School, the quality Quid Pro edition features active Contents, proper formatting, and embedded pagination from the original, for continuity of referencing and citation. Professor Roosevelt catalogs many instances in which the current Court has relied on this book to decide issues of gun rights, federalism, and privacy. In addition, he provides a fascinating biographical summary of Story and describes the origins of this monumental work, as well as the sway it has had on legal history since 1833.