I’m very happy to note the publication of Making the Modern American Fiscal State: Law, Politics, and the Rise of Progressive Taxation, 1877–1929, by Ajay K. Mehrotra, a professor of law and associate dean for research at the Maurer School of Law at Indiana University, Bloomington.  The book appears in the series Cambridge Historical Studies in American Law and Society, which is edited by Christopher Tomlins. 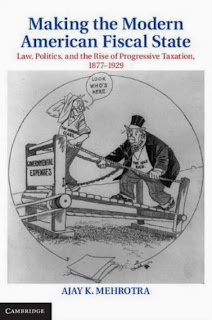 At the turn of the twentieth century, the US system of public finance underwent a dramatic transformation. The late nineteenth-century regime of indirect, hidden, partisan, and regressive taxes was eclipsed in the early twentieth century by a direct, transparent, professionally administered, and progressive tax system. In Making the American Fiscal State, Ajay K. Mehrotra uncovers the contested roots and paradoxical consequences of this fundamental shift in American tax law and policy. He argues that the move toward a regime of direct and graduated taxation marked the emergence of a new fiscal polity - a new form of statecraft that was guided not simply by the functional need for greater revenue but by broader social concerns about economic justice, civic identity, bureaucratic capacity, and public power. Between the end of Reconstruction and the onset of the Great Depression, the intellectual, legal, and administrative foundations of the modern fiscal state first took shape. This book explains how and why this new fiscal polity came to be.

Part II. The Rise of the Modern Fiscal State:
3. The response to Pollock: navigating an intellectual middle ground
4. The factories of fiscal innovation: institutional reform at the state and local level
5. Corporate capitalism and constitutional change: the legal foundations of the modern fiscal state

Reviews by Brian Balogh, Lawrence M. Friedman, Louise Campbell, Richard Bensel, and Michael Bernstein after the jump.
“Mehrotra has crafted a narrative that is fundamental to understanding the modern American state. By unearthing the intellectual, economic, political, and emotional spade work required to lay the groundwork for a major conceptual change in public policy, he shows how a highly decentralized, politicized, and indirect method of taxation was transformed into a centralized, neutrally administered, direct method of taxation with great potential to achieve redistributive ends.” --Brian Balogh, University of Virginia

“Mehrotra’s book refines and extends the historical narrative on the rise of modern American statecraft. The development of the new tax systems this book cogently documents not only allowed a relatively young and newly emergent nation to participate meaningfully in world affairs, but also firmly established modes of governance that would ultimately define the reformist political economy of the mid-twentieth-century United States.” --Michael A. Bernstein, Tulane University
Posted by Dan Ernst at 3:20 PM