Tax resisters have had their historians, including Carolyn Jones, who contributed a chapter on Viven Kellems to a book I edited with Victor Jew.  Now comes Isaac William Martin’s Rich People’s Movements: Grassroots Campaigns to Untax the One Percent (Oxford University Press).  Here’s the description: 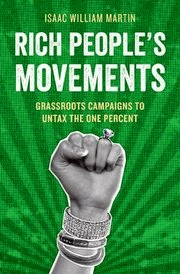 On tax day, April 15, 2010, hundreds of thousands of Americans took to the streets with signs demanding lower taxes on the richest one percent. But why? Rich people have plenty of political influence. Why would they need to publicly demonstrate for lower taxes-and why would anyone who wasn't rich join the protest on their behalf?

Isaac William Martin shows that such protests long predate the Tea Party of our own time. Ever since the Sixteenth Amendment introduced a Federal income tax in 1913, rich Americans have protested new public policies that they thought would threaten their wealth. But while historians have taught us much about the conservative social movements that reshaped the Republican Party in the late 20th century, the story of protest movements explicitly designed to benefit the wealthy is still little known. Rich People's Movements is the first book to tell that story, tracking a series of protest movements that arose to challenge an expanding welfare state and progressive taxation. Drawing from a mix of anti-progressive ideas, the leaders of these movements organized scattered local constituencies into effective campaigns in the 1920s, 1950s, 1980s, and our own era. Martin shows how protesters on behalf of the rich appropriated the tactics used by the Left-from the Populists and Progressives of the early twentieth century to the feminists and anti-war activists of the 1950s and 1960s. He explores why the wealthy sometimes cut secret back-room deals and at other times protest in the public square. He also explains why people who are not rich have so often rallied to their cause.

For anyone wanting to understand the anti-tax activists of today, including notable defenders of wealth inequality like the Koch brothers, the historical account in Rich People's Movements is an essential guide.