[Here, somewhat belatedly, is the announcement of "Sovereignties," the Vanderbilt History Seminar this academic year.] 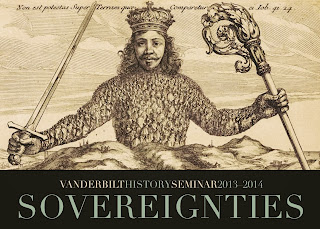 The theme of “sovereignties” offers [the Vanderbilt History Seminar] an opportunity to examine forms of power over a vast temporal and geographic terrain, from the most ancient kingdoms and empires to the modern nation-state. From this perspective, this theme will allow us to engage with fresh and exciting work in political, intellectual, and social history, much of it stimulated by living through an era of global history in which the borders and powers of nation-states have become deeply unsettled.  This unsettling has prompted interest in other kinds of polities across history—empires, city states, confederacies, and tribes—and how they have exercised control over their territory and peoples. It has also generated interested in the deployment of power by groups living “in between” territorially demarcated polities, both on land and at sea. We intend to explore the meanings of sovereignty and power in these borderlands and international maritime zones. And we will be keen to connect our interest in sovereignty to recent work on the break up of colonial empires, the formation of post-colonial and post-independence states, and the religious, ethnic, and racial identities that flourished in these political spaces.

Issues of sovereignty raise intellectual and social questions as well as political ones. We are interested in how different societies and legal regimes have defined sovereignty over time. We will chart how medieval polities began to distinguish the rights of rulers and subjects, and of “superior” and “inferior” groups, in varying parts of a domain, and how such distinctions congealed over time into early modern discourses about “sovereignty.” We will explore the ideologies and practices of “popular sovereignty” launched by the Atlantic Revolutions of the late eighteenth and early nineteenth centuries. And we will inquire into attempts made by rulers, from absolute monarchs to ordinary heads of families, across a broad array of state and non-state polities, to exercise sovereign power over the persons and, in many cases, the actual bodies of those who comprised their households.  Thinking about “household sovereignty” will make gender and reproduction key categories of our historical exploration.

Sovereignty raises questions, finally, not just about political power and patriarchal rule but also about mastery over the self. Self-rule, virtue, and a capacity for independence have been foundational elements of republicanism wherever it has appeared (ancient Greece and Rome, early modern Italian city states, eighteenth-century France, British America and Spanish America); on the other hand, a wide variety of discourses across history, from the theological to the medical and psychological, have challenged this vision of the autonomous, knowing, and disciplined self.  We will use the opportunity afforded by the sovereignty theme to explore varying conceptions of personhood across time and space.

Melanie Newton, University of Toronto
'No Original Right in the Soil of the Country': Indigeneity and Law in the Early Modern Caribbean
January 13, 2014
Sarratt 216/220, 4:10 PM

William Novak, University of Michigan School of Law
Sovereignty and the Creation of the Modern American State
January 27, 2014
Sarratt 216/220, 4:10 PM

John Martin, Duke University
Torture, Early Modern Jurisprudence, and Limits on the Sovereignty of the State and the Self in the Venetian Empire
February 24, 2014
Sarratt 216/220, 4:10 PM

Pekka Hämäläinen, University of Oxford
The Ungovernable: Indigenous Struggle for Power and Sovereignty in North America before 1900
March 17, 2014
Sarratt 216/220, 4:10 PM