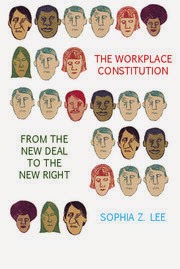 We note with pleasure the publication of The Workplace Constitution from the New Deal to the New Right, by Sophia Z. Lee, Penn Law, in the American Society for Legal History’s book series with the Cambridge University Press, Studies in Legal History.


Today, most Americans lack constitutional rights on the job. Instead of enjoying free speech or privacy, they can be fired for almost any reason or no reason at all. This book uses history to explain why. It takes readers back to the 1930s and 1940s when advocates across the political spectrum – labor leaders, civil rights advocates, and conservatives opposed to government regulation – set out to enshrine constitutional rights in the workplace. The book tells their interlocking stories of fighting for constitutional protections for American workers, recovers their surprising successes, explains their ultimate failure, and helps readers assess this outcome.

We look forward to Professor Lee's book-related posts as a guest blogger in 2015, but for now here are three endorsements:

"The Workplace Constitution from the New Deal to the New Right is both ambitious and important - it moves across time and among a variety of individuals, organizations, and government entities, and it utilizes a wide range of archival material - all of keen interest to historians, legal scholars, and political scientists alike. Lee’s formidable intelligence gives us new insights, as well as historical and historiographical surprises."
Risa L. Goluboff, John Allan Love Professor of Law and Justice Thurgood Marshall Distinguished Professor of Law, University of Virginia

"Sophia Lee brilliantly pairs her analysis of the civil rights movement with the rise of the right-to-work movement and the ‘union-avoidance’ industry. She also matches her fine history of the state action theory with an equally persuasive argument that administrative agencies have been a fruitful source of constitutional visions and versions. This beautifully written book represents deep and broad research and entirely original analysis. I know of nothing like it."
Laura Kalman, University of California, Santa Barbara

"Sophia Lee’s The Workplace Constitution from the New Deal to the New Right is one of the most insightful and provocative studies of the bifurcated matrix of laws and court rulings that govern the American work regime. Deploying a marvellous talent as narrative historian, Lee demonstrates that the attempt to construct a labor relations regime that simultaneously protects the rights of racial minorities proved an enormously vexing and contentious project, one standing close to the heart of American politics for more than half a century."
Nelson Lichtenstein, MacArthur Foundation Professor in History, University of California, Santa Barbara