I’m very please to announce the publication of a project I’ve followed with interest, Ruin and Redemption: The Struggle for a Canadian Bankruptcy Law, 1867-1919 (University of Toronto Press, 2014), by Thomas G.W. Telfer, University of Western Ontario Law.  It appears in the Osgoode Society for Canadian Legal History’s book series.  Any legal historian looking to see how ideas, political calculation, and economic interests converge can learn from it.

Here is the University of Toronto Press’s description: 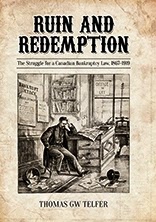 In 1880 the federal Parliament of Canada repealed the Insolvent Act of 1875, leaving debtor-creditor matters to be regulated by the provinces. Almost forty years later, Parliament finally passed new bankruptcy legislation, recognizing that what was once considered a moral evil had become a commercial necessity. In Ruin and Redemption, Thomas GW Telfer analyses the ideas, interests, and institutions that shaped the evolution of Canadian bankruptcy law in this era. Examining the vigorous public debates over the idea of bankruptcy, Telfer argues that the law was shaped by conflict over the morality of release from debts and by the divergence of interests between local and distant creditors. Ruin and Redemption is the first full-length study of the origins of Canadian bankruptcy law, thus making it an important contribution to the study of Canada’s commercial law.


“It is rare to find a work on commercial law that animates the law and its history by drawing insight from political debate, social context and commentary, economic analysis and literature, as well as legislation, case law, and parliamentary records. Ruin and Redemption is a valuable addition to the legal and historical literature on insolvency law.”

“Ruin and Redemption is a significant contribution to the history of Canadian bankruptcy law. It demonstrates skilfully how ideas and interests, and the institutional structures which shaped them, contributed to Canada rejecting bankruptcy law in 1880 and not passing a national statute until 1919. Scholars from a variety of disciplines interested in comparative analysis of bankruptcy law development will benefit from reading this book.”
Iain Ramsay, Kent Law School, University of Kent