Edling's "Hercules in the Cradle"

Max M. Edling, King’s College London, has just published A Hercules in the Cradle: War, Money, and the American State, 1783-1867, with the University of Chicago Press. 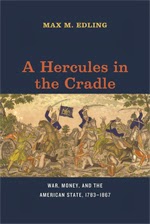 Two and a half centuries after the American Revolution the United States stands as one of the greatest powers on earth and the undoubted leader of the western hemisphere. This stupendous evolution was far from a foregone conclusion at independence. The conquest of the North American continent required violence, suffering, and bloodshed. It also required the creation of a national government strong enough to go to war against, and acquire territory from, its North American rivals.

In A Hercules in the Cradle, Max M. Edling argues that the federal government’s abilities to tax
and to borrow money, developed in the early years of the republic, were critical to the young nation’s ability to wage war and expand its territory. He traces the growth of this capacity from the time of the founding to the aftermath of the Civil War, including the funding of the War of 1812 and the Mexican War. Edling maintains that the Founding Fathers clearly understood the connection between public finance and power: a well-managed public debt was a key part of every modern state. Creating a debt would always be a delicate and contentious matter in the American context, however, and statesmen of all persuasions tried to pay down the national debt in times of peace. A Hercules in the Cradle explores the origin and evolution of American public finance and shows how the nation’s rise to great-power status in the nineteenth century rested on its ability to go into debt.


Richard R. John, Columbia University
“Edling’s Hercules in the Cradle shows how vitally important fiscal policy has been in laying the groundwork for the modern state. Revisionist historians have long challenged the Cold War shibboleth that the national government in the early republic was nothing but a ‘midget institution in a giant land.’ Edling’s distinctive contribution is to bring this revisionist sensibility to the study of public finance. This lucid and informative monograph vaults Edling to the front ranks of historians of state and society in the nineteenth-century United States; it should remain a standard work in the field for many years to come.”

Jack Rakove, author of Original Meanings: Politics and Ideas in the Making of the Constitution
“In his first book, Max Edling virtually forced American historians to rethink the first premises underlying the adoption of the Constitution. The Federalists of 1787-1788, he demonstrated, were true state-builders. In his new book, Edling traces what that state looked like, how it evolved, and how, notwithstanding all the constitutional controversies it provoked, it proved to be a far more effective vehicle for mobilizing national resources for war than most scholars have appreciated. Thanks to Edling, we now have a much more sophisticated basis for comparing the development of the American state after 1789 to its European counterparts.”

Introduction: War, Money, and American History
1.         A More Effectual Mode of Administration: The Constitution and the Origins of American Public Finance
2.         The Soul of Government: Creating an American Fiscal Regime
3.         So Immense a Power in the Affairs of War: The Restoration of Public Credit
4.         Equal to the Severest Trials: Mr. Madison’s War
5.         The Two Most Powerful Republics in the World: Mr. Polk’s War
6.         A Rank among the Very First of Military Powers: Mr. Lincoln’s War
Conclusion: The Ideology, Structure, and Significance of the First American Fiscal Regime
Posted by Dan Ernst at 12:30 AM