Adam Rothman, Associate Professor of History, Georgetown University, has just published Beyond Freedom's Reach: A Kidnapping in the Twilight of Slavery, with the Harvard University Press: 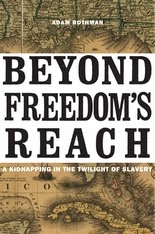 Born into slavery in rural Louisiana, Rose Herera was bought and sold several times before being purchased by the De Hart family of New Orleans. Still a slave, she married and had children, who also became the property of the De Harts. But after Union forces captured New Orleans in 1862 during the American Civil War, Herera’s owners fled to Havana, taking three of her small children with them. Beyond Freedom’s Reach is the true story of one woman’s quest to rescue her children from bondage.

In a gripping, meticulously researched account, Adam Rothman lays bare the mayhem of emancipation during and after the Civil War. Just how far the rights of freed slaves extended was unclear to black and white people alike, and so when Mary De Hart returned to New Orleans in 1865 to visit friends, she was surprised to find herself taken into custody as a kidnapper. The case of Rose Herera’s abducted children made its way through New Orleans’ courts, igniting a custody battle that revealed the prospects and limits of justice during Reconstruction.

Rose Herera’s perseverance brought her children’s plight to the attention of members of the U.S. Senate and State Department, who turned a domestic conflict into an international scandal. Beyond Freedom’s Reach is an unforgettable human drama and a poignant reflection on the tangled politics of slavery and the hazards faced by so many Americans on the hard road to freedom.

“Amidst slavery’s unraveling in New Orleans, Rose Herera fought to prevent her owner from taking her children to Havana, ‘beyond freedom’s reach.’ Rothman’s recovery of Herera’s remarkable story, her incarceration and journey through the legal system to rescue her children, marks an important contribution to the history of emancipation and the contingency of wartime freedom.”—Thavolia Glymph, author of Out of the House of Bondage: The Transformation of the Plantation Household

“The extraordinary odyssey of Rose Herera to recover her kidnapped children from slavery illuminates the impact of the Civil War on the enslavers and the enslaved and reminds us of the precariousness of freedom during the Reconstruction era. An impressive and compelling history.”—Randy J. Sparks, author of Where the Negroes Are Masters: An African Port in the Era of the Slave Trade
Posted by Dan Ernst at 9:39 AM