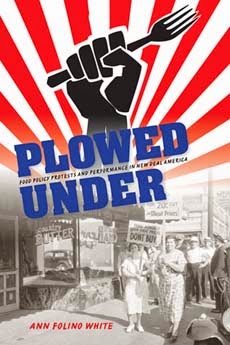 During the Great Depression, with thousands on bread lines, farmers were instructed by the New Deal Agricultural Adjustment Act to produce less food in order to stabilize food prices and restore the market economy. Fruit was left to rot on trees, crops were plowed under, and millions of piglets and sows were slaughtered and discarded. Many Americans saw the government action as a senseless waste of food that left the hungry to starve, initiating public protests against food and farm policy. White approaches these events as performances where competing notions of morality and citizenship were acted out, often along lines marked by class, race, and gender. The actions range from the “Milk War” that pitted National Guardsmen against dairymen, who were dumping milk, to the meat boycott staged by Polish-American women in Michigan, and from the black sharecroppers’ protest to restore agricultural jobs in Missouri to the protest theater of the Federal Theater Project. White provides a riveting account of the theatrical strategies used by consumers, farmers, agricultural laborers, and the federal government to negotiate competing rights to food and the moral contradictions of capitalist society in times of economic crisis.

TOC after the jump.
Introduction
1. The New Deal Vision for Agriculture: USDA Exhibits at the 1933-34 Chicago World’s Fair
2. Milk Dumping Across America’s Dairyland: The May 1933 Wisconsin Dairymen’s Strike
3. Playing “Housewife” in an Urban Polonia: The Hamtramck (Mich.) Women’s 1935 Meat Boycott
4. Hunger on the Highway in the Cotton South: The 1939 Missouri Sharecroppers’ Demonstration
5. Staging the Agricultural Adjustment Act: The Federal Theatre Project’s Triple-A Plowed Under (1936)
Epilogue
Posted by Dan Ernst at 9:30 AM