We have news of the publication Prairie Justice: A History of Illinois Courts under French, English, and American Law, by Roger L. Severns, edited by John A. Lupton (Southern Illinois University Press): 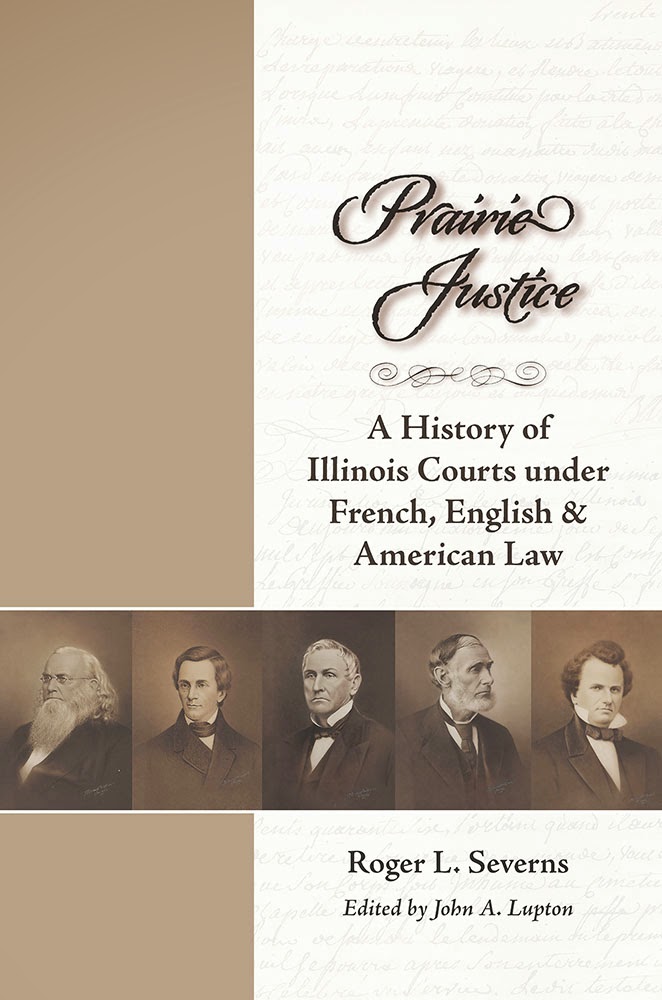 A concise legal history of Illinois through the end of the nineteenth century, Prairie Justice covers the region’s progression from French to British to early American legal systems, which culminated in a unique body of Illinois law that has influenced other jurisdictions. Written by Roger L. Severns in the 1950s and published in serial form in the 1960s, Prairie Justice is available now for the first time as a book, thanks to the work of editor John A. Lupton, an Illinois and legal historian who also contributed an introduction.

Illinois’ legal development demonstrates the tension between two completely different European legal systems, between river communities and prairie towns, and between rural and urban interests. Severns uses several rulings–including a reconstitution of the Supreme Court in 1824, slavery-related cases, and the impeachment of a Supreme Court justice—to examine political movements in Illinois and their impact on the local judiciary. Through legal decisions, the Illinois judiciary became an independent, co-equal branch of state government. By the mid-nineteenth century, Illinois had established itself as a leading judicial authority, influencing not only the growing western frontier but also the industrialized and farming regions of the country. With a close eye for detail, Severns reviews the status of the legal profession during the 1850s by looking at new members of the Court, the nostalgia of circuit riding, and how a young lawyer named Abraham Lincoln rose to prominence.

Severns (1906-61) earned degrees from Beloit College and Chicago Kent College of Law.  He received his Juris Doctor from the University of Chicago Law School in 1938, when the JD was still a graduate law degree.  He worked at Isham, Lincoln, and Beale before leaving that firm to form Parkhill, Severns, and Stansell.  Mr. Lupton, the executive director of the Illinois Supreme Court Historic Preservation Commission, tells me that in the 1950s, the Illinois State Bar Association commissioned the work, which appeared in the Chicago Daily Law Bulletin.  After taking up his duties at the Commission, Mr. Lupton learned of the manuscript, "polished it up, [and] updated some footnotes."   He believes that the book's biggest contribution is "the development, then lack of development, of French law in Illinois.  The author tracked down some really good primary French-period sources and told a good story with them."


Prairie Justice will provide leads for students investigating a whole range of topics related to Illinois history and U.S. legal history. Though written in the 1950s, editor John Lupton has provided notes to the rich literature of legal history that has emerged in the intervening decades. Numerous now-forgotten but nevertheless important cases are glossed here and the mini-biographies are a good place to start in looking for the background of specific Illinois justices.


Illinois and most of the Midwest lived under French law and justice for more than a century, and traces of the French system linger in our law today. Prairie Justice tells that story well, mixing colorful stories with sound scholarship. This book is a useful resource and a good read for anyone interested in early Illinois law and culture.