Guzmán on Civil Rights in the Texas Borderlands

New from the University of Illinois Press: Civil Rights in the Texas Borderlands: Dr. Lawrence A. Nixon and Black Activism, by Will Guzmán (Florida A&M University/Carrie Meek-James Eaton Southeastern Regional Black Archives Research Center and Museum). A description from the Press: 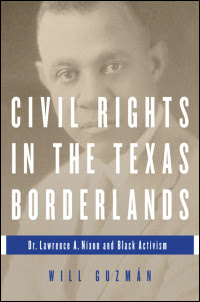 Physician Lawrence A. Nixon fled the racial violence of central Texas to settle in the border town of El Paso. There he became a community and civil rights leader, working on integration and antilynching cases and cofounding the local NAACP chapter. In 1923, Nixon challenged the law that banned African Americans from voting in the Democratic primary. His victory in two subsequent Supreme Court decisions paved the way for dismantling all-white primaries across the South.

Will Guzmán delves into Nixon's lifelong, and mostly unknown, struggle against Jim Crow. Linking Nixon's successful activism to his independence from the white economy, support from the NAACP, and indefatigable courage, Guzmán places Nixon within the context of the larger historical narratives of his era. At the same time, he sheds light on Nixon's presence in both symbolic and literal borderlands--as an educated professional in a time when few went to college, as someone who made waves when most feared violent reprisal, and as an African American living on the mythical American frontier as well as an international boundary.

Enlightening and powerful, Civil Rights in the Texas Borderlands adds to the growing literature on African Americans in the Southwest while exploring a seldom-studied corner of the Black past and the civil rights movement.