Soucek on the Cold War and the 1965 Immigration Act

Brian Soucek, University of California, Davis School of Law, has posted The Last Preference: Refugees and the 1965 Immigration Act which is forthcoming in The Immigration and Nationality Act of 1965: Legislating a New America, ed. Gabriel J. Chin and Rose Cuison Villazor (2015): 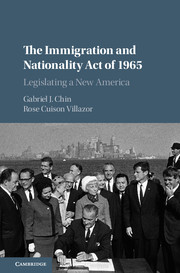 The 1965 Immigration Act is remembered — and celebrated — for having replaced an immigration system driven by national origins with a preference system privileging family ties and occupational skills. But while the rest of the 1965 Act, in President Johnson’s words, welcomed immigrants “because of what they are, and not because of the land from which they sprung,” the last of its preferences, given to refugees, emphatically did not. Not only did the 1965 Act fail to embrace the 1951 U.N. Refugee Convention’s protection for refugees persecuted because of their nationality, the Act itself discriminated on the basis of refugees’ nationality. To qualify, those persecuted had to hail from a “Communist or Communist-dominated country” or “the general area of the Middle East.” A separate provision allowed for entry of those “uprooted by catastrophic natural calamity as defined by the President.” By tying refugees’ status to “the land from which they sprung,” to America’s anti-Communist foreign policy and national security interests, and, importantly, to the discretion of the President, the 1965 Act’s refugee provision suggests a counter-narrative to descriptions of the Act as part the domestic anti-discrimination agenda of the mid-1960s, or as a reassertion of Congressional control over immigration. The 1965 Act turned refugee policy into another weapon of the Cold War, to be deployed largely as the President chose. It would be another fifteen years before Congress again attempted (or at least purported) to do for refugees what the 1965 Act did for most other immigrants: end national origin discrimination and formalize the criteria and procedures governing admission to the United States.

Btw, Cambridge says of Chin and Villazor's collection, due out in October:


Along with the civil rights and voting rights acts, the Immigration and Nationality Act of 1965 is one of the most important bills of the civil rights era. The Act's political, legal, and demographic impact continues to be felt, yet its legacy is controversial. The 1965 Act was groundbreaking in eliminating the white America immigration policy in place since 1790, ending Asian exclusion, and limiting discrimination against Eastern European Catholics and Jews. At the same time, the Act discriminated against gay men and lesbians, tied refugee status to Cold War political interests, and shattered traditional patterns of Mexican migration, setting the stage for current immigration politics. Drawing from studies in law, political science, anthropology, and economics, this book will be an essential tool for any scholar or student interested in immigration law.