Studies in the History of Tax Law

We’ve been noting the posting of abstracts for chapters in volume 7 of Studies in the History of Tax Law, edited by Peter Harris and Dominic de Cogan, which is forthcoming from Hart.  The editors say of the collection: 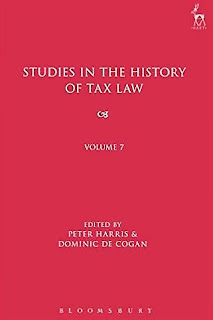 These are the papers from the 2014 Cambridge Tax Law History Conference revised and reviewed for publication. The papers fall within six basic themes. Two papers focus on colonialism and empire dealing with early taxation in colonial New Zealand and New South Wales. Two papers deal with fiscal federalism; one on Australia in the first half of the twentieth century and the other with salt tax in China. Another two papers are international in character; one considers development of the first Australia-United States tax treaty and the other development of the first League of Nations model tax treaties. Four papers focus on UK income tax; one on capital gains, another on retention at source, a third on the use of finance bills and the fourth on establishment of the Board of Referees. Three papers deal with tax and status; one with the tax profession, another with the medical profession and a third with aristocrats. The final three papers deal with tax theorists, one with David Hume, another with the scholarship of John Tiley and a final paper on the tax state in the global era.


Customs duties in the British Colony of New South Wales provided important funds for the economic development of the settlement. This significant source of revenue led to the Colony's Customs Department being established, in Sydney 1827, to administer the collection process. The shift from physical assessments of duty by powerful individuals to a process with legislated and more regulated procedures was not without challenges. The first aim of this chapter is to provide insights into five early inquiries concerning the system of the Colony's customs duties, legislation and practice. With a particular focus on the last two inquiries, it is asked whether any modifications were made to legislation and practice. The second aim is to provide a fuller account of the employment of Frederick Garling (1806-1873) with the Customs Department, Sydney. He was found guilty of serious neglect of duty by the NSW Board of Inquiry of 1858/59. Today, Garling is a recognised Australian colonial artist for his genre of marine watercolours.

Another is A Historical Account of Taxes on Goods and Services in the Transition to Post-Socialist China, by Yan Xu, Chinese University of Hong Kong:


The taxes on goods and services, subject to a very brief interruption, have been separately applied since their inception in early times in modern China. Until now, the Value Added Tax (VAT) is still an incomplete tax as the tax on goods is separate from the tax on services according to the basic legislation, although the two taxes are moving towards an integrated system. The adoption of bifurcated taxes on goods and services has caused a number of problems for the economy and businesses. The question is why the government did not choose a normal VAT system in the first instance if the separation is inefficient. This chapter addresses the question by way of an examination of the historical development of the system of taxes on goods and services in modern China and argues that the design of the system was historically constrained by a number of factors including economic foundations, the level of tax administration and inter-governmental fiscal relations.