Smith on Intestate Succession in Quebec 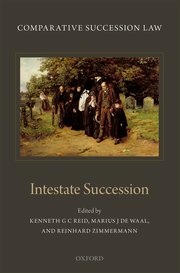 When Quebec became part of the British Empire, its private law was the Custom of Paris. By the Quebec Act 1774, this customary law was retained with the important exception that full freedom of testation was granted. The customary law continued to apply, including for intestate succession, until 1866, long after it had ceased to operate in France. In that year the Civil Code of Lower Canada came into force; for intestate succession, a system based on that of the French Civil Code was adopted. This system was modified only slightly with the coming into force in 1994 of the Civil Code of Québec.

This paper traces the evolution of the law of intestate succession in Quebec up to the modern day, touching also on the different intestacy rules that may apply to First Nations people living in the province.