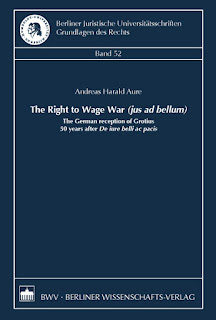 The authors struggled with questions such as:What may serve as right justification (cause) for war? Can an offensive war be just? Can a war be just on both sides?  Has a belligerent the right to pass through third-party territory?  Is there a right to wage war on behalf of people in foreign countries?

Two chapters discuss the conceptual development of jus gentium (the law of nations). As an adherent of Thomas Hobbes’ systematic approach to law, Samuel Pufendorf (1632–1694) realigned jus gentium as natural law (jus naturale). The main topic of this book is a detailed account of the just conditions for war (jus ad bellum) among leading German scholars in the 17th Century, based on in-depth research of primary sources.