Society, Law, and Culture in the Middle East:

We have word of the publication of Society, Law, and Culture in the Middle East: “Modernities” in the Making, ed. Dror Ze’evi and Ehud R. Toledano (De Gruyter, 2015): 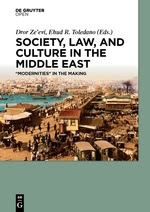 Society, Law, and Culture in the Middle East:“Modernities” in the Making is an edited volume that seeks to deepen and broaden our understanding of various forms of change in Middle Eastern and North African societies during the Ottoman period. It offers an in-depth analysis of reforms and gradual change in the longue durée, challenging the current discourse on the relationship between society, culture, and law. The focus of the discussion shifts from an external to an internal perspective, as agency transitions from “the West” to local actors in the region. Highlighting the ongoing interaction between internal processes and external stimuli, and using primary sources in Arabic and Ottoman Turkish, the authors and editors bring out the variety of modernities that shaped south-eastern Mediterranean history.

The first part of the volume interrogates the urban elite household, the main social, political, and economic unit of networking in Ottoman societies. The second part addresses the complex relationship between law and culture, looking at how the legal system, conceptually and practically, undergirded the socio-cultural aspects of life in the Middle East.

Society, Law, and Culture in the Middle East consists of eleven chapters, written by well-established and younger scholars working in the field of Middle East and Islamic Studies. The editors, Dror Ze'evi and Ehud R. Toledano, are both leading historians, who have published extensively on Middle Eastern societies in the Ottoman and post-Ottoman periods.