Jon C. Blue has published The Case of the Piglet's Paternity: Trials from the New Haven Colony, 1639–1663, with Weslyean University Press: 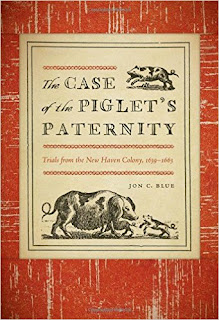 In the middle of the seventeenth century, judges in the short-lived New Haven Colony presided over a remarkable series of trials ranging from murder and bestiality, to drunken sailors, frisky couples, faulty shoes, and shipwrecks. The cases were reported in an unusually vivid manner, allowing readers to witness the twists and turns of fortune as the participants battled with life and liberty at stake. When the records were eventually published in the 1850s, they were both difficult to read and heavily edited to delete sexual matters. Rendered here in modernized English and with insightful commentary by eminent Judge Jon C. Blue, the New Haven trials allow readers to immerse themselves in the exciting legal battles of America’s earliest days.

The Case of the Piglet’s Paternity assembles thirty-three of the most significant and intriguing trials of the period. As a book that examines a distinctive judicial system from a modern legal perspective, it is sure to be of interest to readers in law and legal history. For less litigious readers, Blue offers a worm’s eye view of the full spectrum of early colonial society—political leaders and religious dissidents, farmhands and apprentices, women and children.

“Only a trial judge could have written this book—and only a trial judge with a love of history. Jon Blue has chronicled the legal life of the New Haven Colony during the years from 1638 to 1665, when the Colony was absorbed into the Connecticut Colony. The cast of characters is fascinating, including privateers, Indians, and Quakers, among others . . . hardly the monotonic collection you might expect of 17th century New England. And the legal issues they generated are amazing varied, including the usual (witchcraft) and the unusual (bestiality). This was also an unexpectedly sexually-charged populace. Judge Blue brings these forgotten decades to life with a judicial twinkle in his eye and a graceful, engaging writing style.”—Eugene R. Fidell, Senior Research Scholar in Law and Florence Rogatz Visiting Lecturer in Law, Yale Law School

“Judge Blue has done a favor to anyone interested in the origins of trial by law in colonial New England. The records of the court in New Haven Colony in the mid-seventeenth century were published (in part) more than one hundred and fifty years ago, but they are neither widely known nor properly understood. This volume brings some of the most interesting cases back to life in a lively and well-informed manner. If you have ever wondered why a man might have been judicially murdered on the charge of fathering a deformed piglet, this is the book for you, and Judge Blue is the right guide!”—Stanley N. Katz, professor, Woodrow Wilson School, Princeton University