We are delighted to have with us as a guest blogger this month Samantha Barbas, Associate Professor of Law at SUNY Buffalo Law School. Professor Barbas holds a Ph.D. in American history from the University of California, Berkeley, and a J.D. from Stanford Law School. She was previously an assistant professor of history at Chapman University, a visiting professor of history at U.C. Berkeley, and a lecturer at Arizona State University. She clerked for Judge Richard Clifton on the Ninth Circuit Court of Appeals in Honolulu, Hawaii.  She is the author of two previous books: Movie Crazy: Fans, Stars, and the Cult of Celebrity (2001) and The First Lady of Hollywood: A Biography of Louella Parsons (2005).

She is also the author of Laws of Image: Privacy and Publicity in America, which is just out from the Stanford University Press. 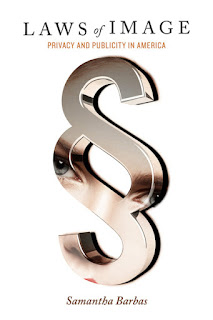 Americans have long been obsessed with their images—their looks, public personas, and the impressions they make. This preoccupation has left its mark on the law. The twentieth century saw the creation of laws that protect your right to control your public image, to defend your image, and to feel good about your image and public presentation of self. These include the legal actions against invasion of privacy, libel, and intentional infliction of emotional distress. With these laws came the phenomenon of "personal image litigation"—individuals suing to vindicate their image rights.

Laws of Image tells the story of how Americans came to use the law to protect and manage their images, feelings, and reputations. In this social, cultural, and legal history, Samantha Barbas ties the development of personal image law to the self-consciousness and image-consciousness that has become endemic in our media-saturated culture of celebrity and consumerism, where people see their identities as intertwined with their public images. The laws of image are the expression of a people who have become so publicity-conscious and self-focused that they believe they have a right to control their images—to manage and spin them like actors, politicians, and rock stars.

"Beautifully written and powerfully argued, Laws of Image shows us how the law develops through culture, leaving us with a rich sense of the struggle that remains as digital culture renders the image as common as the bit. This is not a story with a known ending—Samantha Barbas charts the very origin of an increasingly important legal protection, and the ongoing battle to counter a technology that knows no limits."

"Barbas' book offers a lucid, wide-ranging, and accessible cultural and legal history of a time when privacy mattered, when the law helped ordinary individuals control their images, and when courts considered ratifying a right to be protected from uses others might make of an image. Laws of Image provides readers with an extraordinary voyage to a past that seems almost impossibly quaint and distant."

"In a series of compelling stories of court cases and their social contexts, Samantha Barbas illuminates how evolving ideas about self-image and privacy transformed tort law and the freedom of speech. Laws of Image is an artful combination of cultural and legal history."