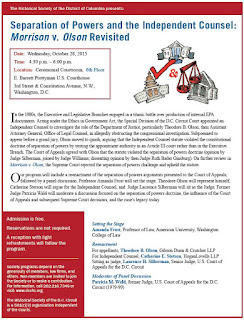 [We have the following announcement of a reenactment of the oral argument in Morrison v. Olson.  Early arrivers for the ASLH meeting take special note!]

In the 1980s, the Executive and Legislative Branches engaged in a titanic battle over production of internal EPA documents. Acting under the Ethics in Government Act, the Special Division of the D.C. Circuit Court appointed an Independent Counsel to investigate the role of the Department of Justice, particularly Theodore B. Olson, then Assistant Attorney General, Office of Legal Counsel, in allegedly obstructing the congressional investigation. Subpoenaed to appear before a grand jury, Olson moved to quash, arguing that the Independent Counsel statute violated the constitutional doctrine of separation of powers by vesting the appointment authority in an Article III court rather than in the Executive Branch. The Court of Appeals agreed with Olson that the statute violated the separation of powers doctrine (opinion by Judge Silberman, joined by Judge Williams; dissenting opinion by then-Judge Ruth Bader Ginsburg). On further review in Morrison v. Olson, the Supreme Court rejected the separation of powers challenge and upheld the statute.

Our program will include a reenactment of the separation of powers arguments presented to the Court of Appeals, followed by a panel discussion. Professor Amanda Frost will set the stage. Theodore Olson will represent himself [emphasis supplied], Catherine Stetson will argue for the Independent Counsel, and Judge Laurence Silberman will sit as the Judge. Former Judge Patricia Wald will moderate a discussion focused on the separation of powers doctrine, the influence of the Court of Appeals and subsequent Supreme Court decisions, and the case’s legacy today.

Admission is free.  Reservations are not required.  A reception with light refreshments will follow the program.

Society programs depend on the generosity of members, law firms, and others. Non-members are invited to join the Society or to make a contribution. For information, call 202.216.7346 or visit here.  The Historical Society of the D.C. Circuit is a 501(c)(3) organization independent of the Courts.