I'm very pleased to announce that Jefferson Decker, an Assistant Professor of American Studies and Political Science at Rutgers University, has published The Other Rights Revolution: Conservative Lawyers and the Remaking of American Government (Oxford University Press). 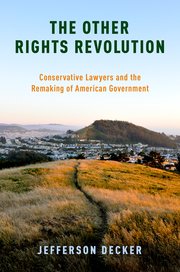 In 1973, a group of California lawyers formed a non-profit, public-interest legal foundation dedicated to defending conservative principles in court. Calling themselves the Pacific Legal Foundation, they declared war on the U.S. regulatory state--the sets of rules, legal precedents, and bureaucratic processes that govern the way Americans do business. Believing that the growing size and complexity of government regulations threatened U.S. economy and infringed on property rights, Pacific Legal Foundation began to file a series of lawsuits challenging the government's power to plan the use of private land or protect environmental qualities. By the end of the decade, they had been joined in this effort by spin-off legal foundations across the country.

The Other Rights Revolution explains how a little-known collection of lawyers and politicians--with some help from angry property owners and bulldozer-driving Sagebrush Rebels--tried to bring liberal government to heel in the final decades of the twentieth century. Decker demonstrates how legal and constitutional battles over property rights, preservation, and the environment helped to shape the political ideas and policy agendas of modern conservatism. By uncovering the history--including the regionally distinctive experiences of the American West--behind the conservative mobilization in the courts, Decker offers a new interpretation of the Reagan-era right.