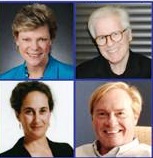 This panel presentation is of historians who practice their craft in a variety of ways.  Held in the historic Kennedy Caucus Room, in the Russell Senate Office Building in Washington, DC, panelists will be asked what, in their personal experiences, are the strengths and weaknesses of their respective genres as vehicles of historical consciousness? How does their end product dictate what they do differently from other historians or purveyors of history?  How, for example, does a novelist and playwright balance "actual history" and "poetic license"?

Cokie Roberts will moderate as well as represent congressional correspondents and popular historians.  In addition to being a best-selling author and winner of countless awards, including three Emmys, Cokie holds more than twenty five honorary degrees, and serves on the boards of several non-profit institutions, including the Capitol Historical Society.  President Bush appointed her to his Commission on Service and Civic Participation.  In 2008 the Library of Congress named her a "Living Legend," one of the very few Americans to have attained that honor.

Mike Hill  is an independent historical researcher, consultant, writer, producer and was a press assistant to a Vice President.  A published writer himself, he has assisted numerous authors and screenwriters, including David McCullough, Ken Burns, Sen. John McCain, Caroline Kennedy and Jon Meacham.  Along with Ken Burns he co-produced the PBS series The Civil War and Baseball and served as an historical consultant for the HBO series, John Adams.

Tom Mallon, is an historical novelist.  His honors include Guggenheim and Rockefeller fellowships, the National Book Critics Circle citation for reviewing, and the Vursell prize of the American Academy of Arts and Letters, for distinguished prose style. He has been literary editor of Gentlemen's Quarterly and deputy chairman of the National Endowment for the Humanities, and in 2012 he was elected to the American Academy of Arts and Sciences. He is currently Professor of English at The George Washington University in Washington, D. C.

Grace Guggenheim has been a producer and executive producer of historical documentaries with Guggenheim Productions, Inc.(r) for over twenty-five years.  Grace has produced over fifteen documentaries for both television and theatrical release. Many of these films have been finished in 35mm for permanent exhibition at museums and presidential libraries around the country. They involved intensive archival research and licensing with private and public resources in the United States and abroad.

Honorary host - Senator Roy Blunt (MO).  Registration will begin at 6:00 and the presentation will begin at 6:30.  A desert reception will follow.  Please preregister by October 16 to the United States Capitol Historical Society at rsvp@uschs.org or (202) 543-8919 x22
Posted by Dan Ernst at 4:00 PM