Timothy S. Huebner, the Irma O. Sternberg Professor of History at Rhodes College, has just published Liberty and Union: The Civil War Era and American Constitutionalism with the University Press of Kansas.  Saith the press: 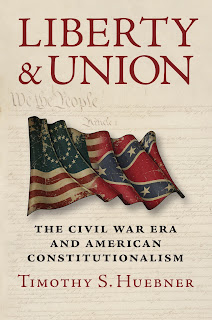 “This book is about the relationship between the Civil War generation and the founding generation,” Timothy S. Huebner states at the outset of this ambitious and elegant overview of the Civil War era. The book integrates political, military, and social developments into an epic narrative interwoven with the thread of constitutionalism—to show how all Americans engaged the nation's heritage of liberty and constitutional government.

Whether political leaders or plain folk, northerners or southerners, Republicans or Democrats, black or white, most free Americans in the mid-nineteenth century believed in the foundational values articulated in the Declaration of Independence of 1776 and the Constitution of 1787—and this belief consistently animated the nation's political debates. Liberty and Union shows, however, that different interpretations of these founding documents ultimately drove a deep wedge between North and South, leading to the conflict that tested all constitutional faiths. Huebner argues that the resolution of the Civil War was profoundly revolutionary and also inextricably tied to the issues of both slavery and sovereignty, the two great unanswered questions of the Founding era.

Drawing on a vast body of scholarship as well as such sources as congressional statutes, political speeches, military records, state supreme court decisions, the proceedings of black conventions, and contemporary newspapers and pamphlets, Liberty and Union takes the long view of the Civil War era. It merges Civil War history, US constitutional history, and African American history and stretches from the antebellum era through the period of reconstruction, devoting equal attention to the Union and Confederate sides of the conflict. And its in-depth exploration of African American participation in a broader culture of constitutionalism redefines our understanding of black activism in the nineteenth century. Altogether, this is a masterly, far-reaching work that reveals as never before the importance and meaning of the Constitution, and the law, for nineteenth-century Americans.

Jonathan Lurie, Rutgers University, blurbs: “At last, a brilliant, imaginative, and original re-examination which synthesizes the histories of the Civil War, of constitutional and legal development, and of the African American experience. The result is a masterful and beautifully written study that will stand out as a superb contribution.”
Posted by Dan Ernst at 9:30 AM