Rudenstine on "The Supreme Court, National Security, and the Constitutional Order"

New from Oxford University Press: The Age of Deference: The Supreme Court, National Security, and the Constitutional Order (August 2016), by David Rudenstine (Cardozo School of Law). A description from the Press: 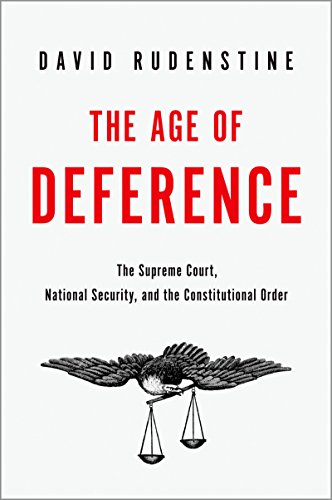 In October 1948-one year after the creation of the U.S. Air Force as a separate military branch-a B-29 Superfortress crashed on a test run, killing the plane's crew. The plane was constructed with poor materials, and the families of the dead sued the U.S. government for damages. In the case, the government claimed that releasing information relating to the crash would reveal important state secrets, and refused to hand over the requested documents. Judges at both the U.S. District Court level and Circuit level rejected the government's argument and ruled in favor of the families. However, in 1953, the Supreme Court reversed the lower courts' decisions and ruled that in the realm of national security, the executive branch had a right to withhold information from the public. Judicial deference to the executive on national security matters has increased ever since the issuance of that landmark decision. Today, the government's ability to invoke state secrets privileges goes unquestioned by a largely supine judicial branch.

David Rudenstine's The Age of Deference traces the Court's role in the rise of judicial deference to executive power since the end of World War II. He shows how in case after case, going back to the Truman and Eisenhower presidencies, the Court has ceded authority in national security matters to the executive branch. Since 9/11, the executive faces even less oversight. According to Rudenstine, this has had a negative impact both on individual rights and on our ability to check executive authority when necessary. Judges are mindful of the limits of their competence in national security matters; this, combined with their insulation from political accountability, has caused them in matters as important as the nation's security to defer to the executive. Judges are also afraid of being responsible for a decision that puts the nation at risk and the consequences for the judiciary in the wake of such a decision. Nonetheless, The Age of Deference argues that as important as these considerations are in shaping a judicial disposition, the Supreme Court has leaned too far, too often, and for too long in the direction of abdication. There is a broad spectrum separating judicial abdication, at one end, from judicial usurpation, at the other, and The Age of Deference argues that the rule of law compels the court to re-define its perspective and the legal doctrines central to the Age.


"David Rudenstine's new book is a calmly worded expression of outrage at the Supreme Court's violation of the rights of the individual in the name of deference to the Executive branch of the government. Massively documented, this troubling account of secret courts, unregulated surveillance, and unlawful detentions could not be more timely at a point when the future composition of the Court hangs in the political balance. It is not often that scholarship impeccably performed intersects with the urgent needs of the country and of Democracy." -- Stanley Fish

"A compelling account of how courts have abdicated their responsibility when it comes to holding the executive branch accountable to constitutional limits in the realm of national security. Rudenstine persuasively shows that judicial deference has afforded the executive a blank check, and illustrates why such an approach is fundamentally irresponsible." -- David Cole