Tarter on Race, Law, and Public Debt in Virginia

New from the University of Virginia Press: A Saga of the New South: Race, Law, and Public Debt in Virginia (July 2016), by Brent Tarter (Library of Virginia). A description from the Press:


In the lead-up to the Civil War, Virginia, like other southern states, amassed a large A Saga of the New South delves into the largely untold story of the decades-long postwar controversies over the repayment of that debt. The result is a major reinterpretation of late-nineteenth-century Virginia political history. 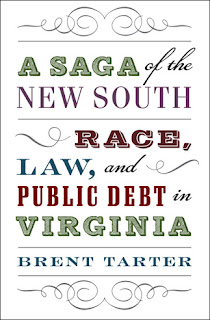 The post–Civil War public debt controversy in Virginia reshaped the state’s political landscape twice. First it created the conditions under which the Readjuster Party, a biracial coalition of radical reformers, seized control of the state government in 1879 and successfully refinanced the debt; then it gave rise to a counterrevolution that led the elitist Democratic Party to eighty years of dominance in the state's politics. Despite the Readjusters’ victory in refinancing the debt and their increased spending for the popular new system of free public schools, the debt controversy generated a long train of legal disputes—at least eighty-five cases reached the Virginia Supreme Court of Appeals, and twenty-nine reached the Supreme Court of the United States. Through an in-depth look at these political and legal contests, A Saga of the New South sheds new light on the many obstacles that reformers faced in Virginia and the South after the Civil War.

"A Saga of the New South is a remarkable piece of highly original scholarship on a hugely important topic in Virginia history. Brent Tarter's treatment—thorough yet provocative, a vintage Tarter production—goes far to explain the ferocious struggle and historical discontinuity of late-nineteenth-century Virginia politics, a struggle that reverberated from Reconstruction down through the years of Harry F. Byrd to Massive Resistance." -- Peter Wallenstein

"No one knows Virginia's political history better than Brent Tarter. With expert skill, he traces the twisting path of Virginia's debt controversy through the tumultuous decades after the Civil War, revealing fault lines that endure to today." -- Edward Ayers