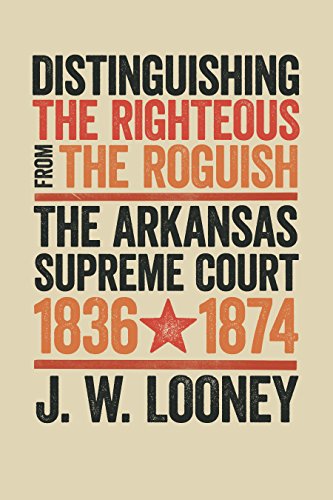 During the period from 1836 to 1874, the legal system in the new state of Arkansas developed amid huge social change. While the legislature could, and did, determine what issues were considered of importance to the populace, the Arkansas Supreme Court determined the efficacy of legislation in cases involving land titles, banks, transportation, slavery, family law, property, debt, contract, criminal law, and procedure.

Distinguishing the Righteous from the Roguish examines the court’s decisions in this era and shows how Arkansas, as a rural slave-holding state, did not follow the transformational patterns typical of some other states during the nineteenth century. Rather than using the law to promote broad economic growth and encourage social change, the Arkansas court attempted to accommodate the interests of the elite class by preserving the institution of slavery. The ideology of paternalism is reflected in the decisions of the court, and Looney shows how social and political stability—an emphasis on preserving the status quo of the so-called righteous—came at the expense of broader economic development.