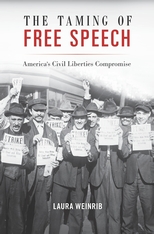 In the early decades of the twentieth century, business leaders condemned civil liberties as masks for subversive activity, while labor sympathizers denounced the courts as shills for industrial interests. But by the Second World War, prominent figures in both camps celebrated the judiciary for protecting freedom of speech. In this strikingly original history, Laura Weinrib illustrates how a surprising coalition of lawyers and activists made judicial enforcement of the Bill of Rights a defining feature of American democracy.

The Taming of Free Speech traces our understanding of civil liberties to conflict between 1910 and 1940 over workers’ right to strike. As self-proclaimed partisans in the class war, the founders of the American Civil Liberties Union promoted a bold vision of free speech that encompassed unrestricted picketing and boycotts. Over time, however, they subdued their rhetoric to attract adherents and prevail in court. At the height of the New Deal, many liberals opposed the ACLU’s litigation strategy, fearing it would legitimize a judiciary they deemed too friendly to corporations and too hostile to the administrative state. Conversely, conservatives eager to insulate industry from government regulation pivoted to embrace civil liberties, despite their radical roots. The resulting transformation in constitutional jurisprudence—often understood as a triumph for the Left—was in fact a calculated bargain.

America’s civil liberties compromise saved the courts from New Deal attack and secured free speech for labor radicals and businesses alike. Ever since, competing groups have clashed in the arena of ideas, shielded by the First Amendment.

Samuel Moyn's review in the Wall Street Journal is here.  And here are two endorsements:

“This is a big, bold project, a painting on a large canvas, depicting many different scenes in the manner of a Brueghel painting or WPA mural. It is a major work of history which will, I am quite sure, remain for many years the authoritative account of the ACLU’s pivotal role in producing our modern law of free expression.”—Robert W. Gordon, Stanford Law School

“Weinrib’s important reconstruction of the history of our notions of free expression shows how an idea first offered on behalf of labor radicals became transformed into a general account of why all dissent from the conventional should be protected. The Taming of Free Speech is a major contribution to the history of civil liberties.”—Mark Tushnet, Harvard Law School
Posted by Dan Ernst at 12:30 AM