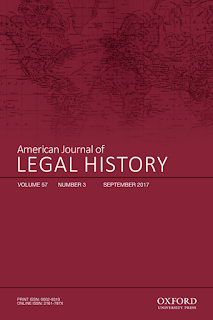 The American Journal of Legal History 57: 3 (September 2017) is now available in its entirety.

From Petitions for Gratuities to Claims for Damages: Personal Injuries and Railroads During the Industrialization of the United States, by Robert J. Kaczorowski

‘His Barbarous Usages’, Her ‘Evil Tongue’: Character and Class in Trials for Spouse Murder at the Old Bailey, 1674-1790, by Andrea McKenzie

Richard Alan Ryerson, John Adams' Republic: The One, the Few, and the Many
Luke Mayville, John Adams and the Fear of American Oligarchy
Tom Cutterham

Peter Wallenstein, Race, Sex, and the Freedom to Marry: Loving v. Virginia
Alison Lefkovitz
Posted by ernst at 12:30 AM