[We have the following announcement of issue 25 of the journal Rechtsgeschichte - Legal History.]

The most recent issue of the journal of the Max Planck Institute for European Legal History has just been released and is now available online in open access and in print.  Rg 25 is dedicated to the concept of "Multinormativity", one of the four research focus areas of our Institute: 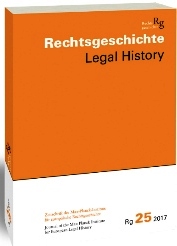 The introduction to the thematic focus "Multinormativity" sheds light on both what is meant by "Multinormativity" and wherein the difference to "legal pluralism" lies. The subsequent contributions ask about constellations and modalities of legal diversity, about constellations of interaction in and the normative levels behind the juridical praxis. This panorama extends from "collaborative legal pluralism" of spiritual, secular and moral-theological normativity in the 16th century to the differentiae-literature and the ius commune of the 17th and 18th centuries to scholarly practices and the standardisation of good scholarly praxis in the same period. The 19th and 20th-century courts of honour are presented as places where different normative rationalities came together, the internal pluralisation of the normative orders through a more consistent democratisation of norm generation in the present are worked out, and the normative charging of transnational rights since the 1970s are demonstrated by the example of the OECD Guidelines for Multinational Enterprises and their interaction with state, national or intergovernmental and international law. Two authors deal with the symbiosis of legal and illegal normative orders in the area of criminal politics, another contribution takes up legal aesthetics and analyses the coupling of value judgments (both of an aesthetic and moral kind), and in doing so delves deep under the surface of normative thinking and acting. Two further contributions devote their attention to observing talk about legal diversity.

The second focus emerged out of a research project at the Max Planck Institute for Human Development and examines "Criminal Law and Emotions": Prefaced with an introduction to the topic, a first article explores the emotional dynamics of negotiated justice in European legal cultures from the 15th to the 18th century, followed by a contribution on "Legal Insanity: Towards an Understanding of Free Will Through Feeling in Modern Europe". Moving to the early 20th century, the third article "Beyond Dispassion" analyses how norms about emotions changed for judges in revolutionary Russia. This section closes with an examination of "Rhetorical Engineering of Emotions in the Courtroom" which deals with the emotional norms and lawyer's courtroom performances in modern France.

The research section, which opens the issue, begins with a reflection about the major question of the relationship between law, time and legal history. Andreas Thier has taken up this challenge. Using precisely selected prominent examples stemming from the classic texts of legal history - such as the potestas legislatoria, the conception of office (Amtsbegriff), the eternity clause, systems of knowledge ordering, natural law, statute of limitation and legal fiction, damnatio memoriae or periculum and periculum in mora - he illustrates the diverse realisation of law and time between the early Middle Ages and modern period. As a second contribution to this section, we are again publishing an article about the contemporary history of legal scholarship in the Berlin Republic. In the context of the Institute's project Legal Scholarship in the Berlin Republic, Jan Thiessen dealt so exhaustively with the history of trade- and corporate law - in the language of the Berlin Republic: the company law - that we decided to print this piece of radical contemporary history.

Finally, in the critique section, a particular emphasis on monographs that take up the historical forms of normative diversity is evident again. As always, we are very grateful to the reviewers for discussing as many publications as possible in languages other than those in which they were written. As this issue demonstrates, multilingualism is for us here both a guiding principle and reality.

Click here to get to the Rg website, where you will find all contributions in open access, or you can order a hardcopy directly from the publisher.
Posted by ernst at 12:30 AM