Louis Fisher, scholar in residence at The Constitution Project in Washington, DC, has published Supreme Court Expansion of Presidential Power: Unconstitutional Leanings with the University Press of Kansas. 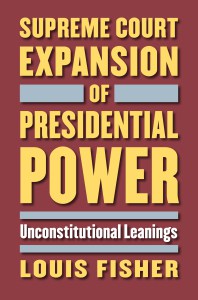 In the fourth of the Federalist Papers, published in 1787, John Jay warned of absolute monarchs who “will often make war when their nations are to get nothing by it.” More than two centuries later, are single executives making unilateral decisions any more trustworthy? And have the checks on executive power, so critical in the Founders’ drafting of the Constitution, held? These are the questions Louis Fisher pursues in this book. By examining the executive actions of American presidents, particularly after World War II, Fisher reveals how the Supreme Court, through errors and abdications, has expanded presidential power in external affairs beyond constitutional boundaries—and damaged the nation’s system of checks and balances.

Supreme Court Expansion of Presidential Power reviews the judicial record from 1789 to the present day to show how the balance of power has shifted over time. For nearly a century and a half, the Supreme Court did not indicate a preference for which of the two elected branches should dominate in the field of external affairs. But from the mid-thirties a pattern clearly emerges, with the Court regularly supporting independent presidential power in times of “emergency,” or issues linked to national security. The damage this has done to democracy and constitutional government is profound, Fisher argues. His evidence extends beyond external affairs to issues of domestic policy, such as impoundment of funds, legislative vetoes, item-veto authority, presidential immunity in the Paula Jones case, recess appointments, and the Obama administration's immigration initiatives.

The book has a pretty terrific dedication, or at least it seems so to us, as Congress returns to session during another fraught moment in the Presidency of Donald J. Trump:


To Justice Robert Jackson, who wrote in the Steel Seizure Case: “With all its defects, delays and inconveniences, men have discovered no technique for long preserving free government except that the Executive be under the law, and that the law be made by parliamentary deliberations.”

Fisher discusses the book on Just Security.
Posted by ernst at 11:31 AM