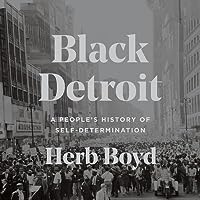 In the New York Times, Thomas Sugrue reviews Black Detroit: A People’s History of Self-Determination by Herb Boyd. In the tradition of the griot,” Sugrue writes, “Boyd has written a song of praise to what he calls ‘the city’s glorious history’ and offers an unusual retelling of Detroit’s past, with black voices on nearly every page.”

The book was also reviewed in the Washington Post a few weeks ago. In the LA Review of Books, Scott Kurashige is also interested in Detroit. Check out his article in that publication: The Fifty-Year Rebellion: How the U.S. Political Crisis Began in Detroit.

Also in the Times, Michelle Goldberg reviews Blurred Lines: Rethinking Sex, Power and Consent on Campus, which reflects Vanessa Grigoriadis’s reporting on sexual assault in American campuses during the Obama years--“the murky campus rape phenomenon”--but is “too sloppy with the facts to succeed.”

Also in both publications: reviews of William Taubman’s new biography of Mikhail Gorbachev, which is “superb” according to David E. Hoffman, former Moscow bureau chief for The Washington Post, and “masterly” for Peter Baker at the New York Times.

In the Post, Sam Quinones describes The Hamlet Fire: A Story of Cheap Food, Cheap Government, and Cheap Lives, Bryant Simon’s new book on a 1991 fire at the Imperial Food chicken processing plant in North Carolina.
“Simon’s list of the ways Roe practiced unfair competition by flouting safety regulations is long and graphic,” and at each moment, “Roe was met by a government rendered flaccid by its new role as protector not of working people or of the middle class, but of capital.” Quinones credits Simon for drawing this “sprawling, occasionally nauseating story in the detritus of that now-forgotten fire,” and calls the story “captivating and brilliantly conceived,” ready to “provide readers with insights into our current national politics.” Simon’s book is reviewed in the Minnesota Star Tribune and Smithsonian Magazine.

In the LA Review of Books, Stephen Rhode reviews Hitler’s American Model: The United States and the Making of Nazi Race Law, James Q. Whitman’s “disturbing and alarming new book based on detailed and scrupulous scholarship,” which concludes--in Whitman’s words--that “the Nazis took a sustained, significant, and sometimes even eager interest in the American example in race law.” The same publication contains a review of Democracy in Chains: The Deep History of the Radical Right’s Stealth Plan for America, in which “historian Nancy MacLean establishes that the Republican Party of today has been entirely transformed,” to “a party of extreme libertarians whose goal is not to conserve what we have, but to destroy democracy” and advance “the corporate takeover of public resources.”

In an article in the London Review of Books (entitled “Umbrageousness”), Ferdinand Mount review Inglorious Empire: What the British Did to India by Shashi Tharoor, The Making of India: The Untold Story of British Enterprise by Kartar Lalvani, and India Conquered: Britain’s Raj and the Chaos of Empire by Jon Wilson. Malcolm Gaskill also covers Accidents and Violent Death in Early Modern London, 1650-1750 by Craig Spence, and Peter Green reviews Athens Burning: The Persian Invasion of Greece and the Evacuation of Attica by Robert Garland. These reviews are behind a paywall.

In the New Books Network, Siobahn Barco speaks to Tracy A. Thomas about her book Elizabeth Cady Stanton and the Feminist Foundations of Family Law. Professor Thomas is the John F. Seiberling Chair of Constitutional Law and Director of the Constitutional Law Center at the University of Akron School of Law. She is also editor of the Gender and the Law Prof Blog.  Also in the NBN, Jason Schulman talks to Carwyn Jones about her New Treaty, New Tradition: Reconciling New Zealand and Maori Law, which explores Māori law and legal traditions with an eye on how they ebb and flow with changing social, environmental, and political circumstances in New Zealand.
Posted by Smita Ghosh at 11:52 AM