[We have the following announcement.] The Committee on Honors of the American Society for Legal History solicits nominations of senior scholars for possible election as Honorary Fellows of the Society.  Election as an Honorary Fellow is the highest honor the Society can confer.  It 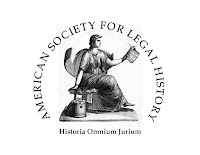 recognizes distinguished historians whose scholarship has shaped the broad discipline of legal history and influenced the work of others.  Honorary Fellows are the scholars we admire, whom we aspire to emulate, and on whose shoulders we stand.  Nominees may work in any field and any country.

Please submit nominations by email to the chair of the committee, Bruce H. Mann, at mann@law.harvard.edu by Friday, October 27.  Nominations should include a brief statement describing how nominees and their scholarship have helped define their fields and influenced other scholars—in short, why they should be honored as leading citizens of the community of scholars.  Formal dossiers or c.v’s are not required at this stage.
Posted by ernst at 12:00 PM