Akçam and Kurt on the Armenian Genocide

We missed this one back in 2015, when an English-language translation by Aram Arkun of The Spirit of the Laws: The Plunder of Wealth in the Armenian Genocide came out with Berghahn. The book's authors are Taner Akçam, Clark University, and Umit Kurt, Center for Middle Eastern Studies, Harvard University. From the press: 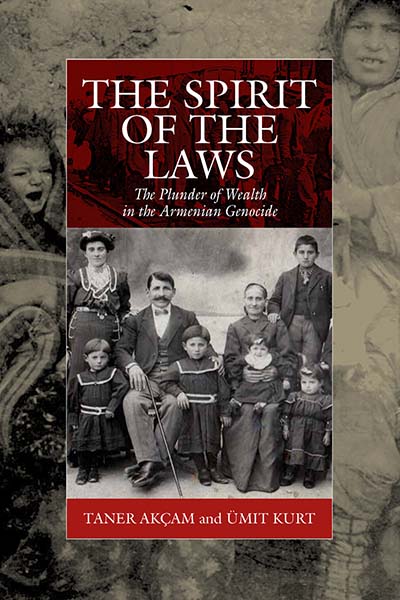 Pertinent to contemporary demands for reparations from Turkey is the relationship between law and property in connection with the Armenian Genocide. This book examines the confiscation of Armenian properties during the genocide and subsequent attempts to retain seized Armenian wealth. Through the close analysis of laws and treaties, it reveals that decrees issued during the genocide constitute central pillars of the Turkish system of property rights, retaining their legal validity, and although Turkey has acceded through international agreements to return Armenian properties, it continues to refuse to do so. The book demonstrates that genocides do not depend on the abolition of the legal system and elimination of rights, but that, on the contrary, the perpetrators of genocide manipulate the legal system to facilitate their plans.

“This book is a valuable addition to filling the gaps of our understanding of genocide and helps readers navigate complex terrain in the case study presented… I recommend this book as a case study to be included in graduate level courses. In addition to its thorough review of the questionable statecraft of genocidal states, it is a reminder of the merits of engaged scholarship. Akçam and Kurt, by sharing their research as an act of solidarity with citizens who continue to challenge state restraints and master narratives based on genocide, make a contribution to the ongoing process of crafting a just society.” -Histoire Sociale/Social History
“[This volume] will make an invaluable contribution to the field of genocide studies. It is meticulously researched and features superb attention to detail.” -Deborah Mayersen
“Akçam and Kurt have written a fundamentally important book... We know that genocides are accompanied by the expropriation of the assets possessed by the targeted population... But nothing like that has been done for the Armenian Genocide—until now.”  -Eric Weitz