Thank you to Karen and the Legal History Blog team for giving me an opportunity to blog this month. I’ve learned a lot from reading the LHB, especially from posts about the path to first books, so I’m excited to share a bit about my book experience. 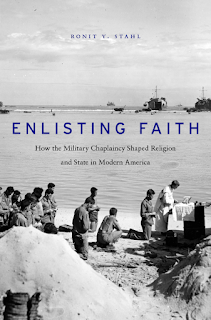 I wrote Enlisting Faith: How the Military Chaplaincy Shaped Religion and State in Modern America (Harvard, 2017) over the course of two postdocs. These positions provided a lot of protected research and writing time, which in turn enabled me to publish a book relatively quickly. But publishing as a postdoc is not without its difficulties. As a result, I’ll devote some of my posts to the benefits and challenges of writing a book as a postdoc—if you have any particular questions about navigating postdoc publishing, please ask in the comments!

Before I address these structural conditions of writing, let me offer a brief introduction to the book and to the chaplaincy. In his dissent in Abington v. Schempp, Justice Potter Stewart noted that the military chaplaincy represented a “single, obvious example” of religion-state interaction. It is a rich and varied example that offers a lot of material to think with and through. However, as I learned while working on this project, it might not be as "obvious" as Stewart assumed. When I talked about my research, for both the dissertation and the book, a fairly common reaction was “huh, the military chaplaincy. I’ve never really thought about that.” Making the chaplaincy approachable to those unfamiliar with it (or whose reference point might be only Chaplain Mulcahy in M*A*S*H) became one of my tasks. Chaplains are clergy in uniform: recruited, commissioned, employed, and overseen by the federal government to provide religious support and facilitate religious life in the armed forces.

Enlisting Faith tells the history of the twentieth-century military chaplaincy and, through it, a history of religion and the state in modern America. It is therefore both an institutional history and a history of a deep (and deeply significant) relationship between the federal government and religion. Moving from World War I to the 1990s, it traces the uneven processes through which the military struggled with, encouraged, and regulated religious pluralism over the twentieth century.

Military chaplains have served since the American Revolution, but the persistence of an arrangement in which the state organized religious activity is unusual. Despite assumed secularism, the military built a massive infrastructure to instill religion in its personnel. Enlisting Faith documents episodes of negotiation and cooperation, encounter and engagement, pragmatism and innovation. Friction was inevitable, but the military generally managed it away from the public eye and outside courtrooms. On the rare occasions when federal judges considered the constitutionality of the chaplaincy, they generally accepted it as a necessary engine of free exercise of religion in the military.

Yet avoiding establishment while enabling free exercise was challenging. The decision to mobilize religion to support martial endeavors had consequences: for the military and the state, for soldiers and religious groups, and for American politics and society writ large. Enlisting Faith narrates a series of interconnected stories about religious encounter, state regulation, and trials of faith to demonstrate how religion and the state shaped one another. It unmasks how religious groups vied for attention, accommodations, and power. And it reveals how the state has seen and categorized, hindered and promoted, challenged and supported religion.

There are a lot of moving pieces in this narrative, so in my next post, I’ll talk about structure and organization.