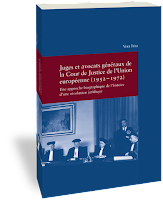 [We have the following announcement from our friends at the Max Planck Institute for European Legal History.]

Drawing on archives assembled in the six founding member states of the European Union, the new French-language volume in the series "Studien zur europäischen Rechtsgeschichte" offers a new perspective on the"constitutionalisation process" of the European treaties that were launched in the 1960s by the EU Court of Justice. It examines the dynamics that prevailed within the institution during its revolutionary years and highlights the professional and personal backgrounds of the first European judges and Advocates General, some of whom help shape some of the most well-known and commented judgments of the Court. The author seeks to understand how the judges succeeded in seriously limiting the sovereignty of the member states without provoking a rebellion by national decision-makers. The book focuses on the Court's political network and the relationship of judges with the governments of the member states. Through a detailed study of the selection process of the members of the Court, this monograph also provides answers to the question of whether governments tried to put an end to its bold jurisprudence by changing the composition of the bench of judges.

For more information and TOC, see the website of the Max Planck Institute for European Legal History.
Posted by Dan Ernst at 11:00 AM