The Rogers Collection at BC Law

One of the unexpected pleasures of presenting in the Boston College Legal History Roundtable was the chance to a view new exhibition in the Daniel R. Coquilette Rare Book Room, The James S. Rogers Collection: 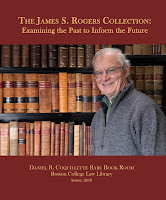 This exhibition features books donated to the Rare Book Room by Professor James S. Rogers. Professor Rogers, who retired from Boston College Law School in 2017, spent his years in academia teaching and writing in the areas of contracts, modern commercial law (particularly payment systems), the law of restitution, and the history of Anglo-American commercial law.

Professor Rogers started building his rare book collection when he was researching and writing The Early History of the Law of Bills and Notes (Cambridge University Press, 1995). Years of teaching law students and working on the Uniform Commercial Code led him “to the realization that something was amiss with the law of negotiable instruments [e.g., checks, promissory notes] as embodied in Articles 3 and 4 of the American Uniform Commercial Code.” Professor Rogers notes, “Ironically, concern for the future of commercial law led me to examine its past.”

The exhibit, which runs until July, was curated by Laurel Davis and Katie Lewis.  A downloadable version of the exhibit catalogue is here.
Posted by Dan Ernst at 12:30 AM