Out now as an ebook and with a publication date just days away is The Trouble with Minna: A Case of Slavery and Emancipation in the Antebellum North by Hendrik Hartog, the Class of 1921 Bicentennial Professor in the History of American Law and Liberty and the director of the Program in American Studies at Princeton University. 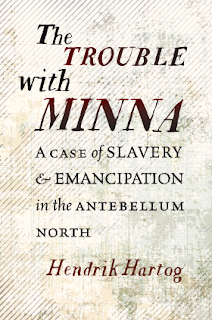 In this intriguing book, Hendrik Hartog uses a forgotten 1840 case to explore the regime of gradual emancipation that took place in New Jersey over the first half of the nineteenth century. In Minna’s case, white people fought over who would pay for the costs of caring for a dependent, apparently enslaved, woman. Hartog marks how the peculiar language mobilized by the debate—about care as a “mere voluntary courtesy”—became routine in a wide range of subsequent cases about “good Samaritans.” Using Minna’s case as a springboard, Hartog explores the statutes, situations, and conflicts that helped produce a regime where slavery was usually but not always legal and where a supposedly enslaved person may or may not have been legally free.

In exploring this liminal and unsettled legal space, Hartog sheds light on the relationships between moral and legal reasoning and a legal landscape that challenges simplistic notions of what it meant to live in freedom. What emerges is a provocative portrait of a distant legal order that, in its contradictions and moral dilemmas, bears an ironic resemblance to our own legal world.
Here are some endorsements:


“This remarkably provocative, thoughtful, and original work is marked by Hartog’s gift for storytelling, his mastery of the law, and his exquisitely nuanced appreciation for the quirks of human motivation as shaped by the codes of American legal culture.”--Amy Dru Stanley, University of Chicago

“Using his trademark combination of brilliant doctrinal reasoning and intense archival research, Hartog has drawn insights that will help reshape scholarship on slavery and advance our understanding of legal institutions in the nineteenth-century United States.”—Rebecca J. Scott, University of Michigan

Professor Hartog will discuss the book on two occasions (that we know of) next month.  On Monday, April 9, from 12:00pm to 1:00pm he will speak at the William G. McGowan Theater in the National Archives Building on Pennsylvania Avenue, NW in Washington, DC.  You may tune in to the event live on YouTube.  Then, on a space available basis, members of the public may also attend Professor Hartog's book talk under the auspices of Law and Public Affairs Program in on Monday, April 30, at 12:10pm in Bowl 1, Robertson Hall, Princeton University.
Posted by Dan Ernst at 12:30 AM