Jennifer M. Chacón, University of California, Irvine School of Law, has posted Unsettling History, a review of Kelly Lytle Hernández’s City of Inmates, which will appear in the Harvard Law Review 131 (2018): 1078-1123: 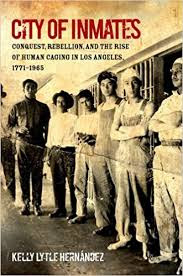 This review examines Kelly Lytle Hernández’s book City of Inmates: Conquest, Rebellion and the Rise of Human Caging in Los Angeles, 1771-1965. The book argues for a recognition of the unacknowledged extent to which so much of our criminal enforcement system — and particularly the growth of the carceral state — embodies a broader settler-colonial project. The enslavement and the continued subjugation of African Americans is an essential component of this story. Hernández’s work situates the legacy of slavery in the broader settler-colonial frame, while simultaneously bringing into focus the ways that the elimination of indigenous peoples and related imperialist foreign policy objectives have also been important ingredients in the evolution of the contemporary criminal enforcement system. She not only provides details of events and developments that are overlooked in some other accounts, but also complicates our understanding of some well-known developments, including the growth of the federal prison system, the development and enforcement of vagrancy laws, and the interplay between immigration enforcement and criminal enforcement.

Hernández’s history of Los Angeles tells a story of the rise of mass incarceration that looks different from the story captured in other widely read, high-level accounts. Her specific and distinctive geographic focus allows her to think about how various bodies of laws and a multiplicity of state actors were interacting in synergistic ways to generate a system of social control that generally served the ends of white settlers of the Los Angeles basin at the expense of its indigenous inhabitants as well as of poor, itinerant workers, Chinese immigrants, Mexicans and Mexican Americans, and black Angelinos. In telling this story, however, Hernández departs from several conventions of legal academic analysis. First, she ignores formalistic divisions among carceral categories. Second, she blurs more boundaries by interweaving her discussion of sites of incarceration with discussions of broader mechanisms of social control, particularly street policing. Finally, as set forth in section C, she upends the traditional focus on federal crime control policies and programs in favor of a multilevel analysis of governmental policies and practices designed to facilitate the creation of a white settler city. By collapsing the boundaries between interconnected systems and practices that are formally separate, Hernandez illuminates the common logics behind laws and policies that are often treated as unrelated. The intellectual act of drawing connections between these formally unrelated systems and practices is essential to the reform of our current system of criminal enforcement.