Low-Tech Tools for Structuring a Book

One of the big questions any author faces is how to structure a book. The options are, at least in theory, endless. And this can be a good thing: imagining a variety of fanciful options is one way to get out of a rut. In my case, however, the range of options was a little more confined. Since I was writing about the military chaplaincy over almost a century, I knew Enlisting Faith needed to move chronologically to make sense.

But deciding on a chronological narrative clarified only the broadest possible contours of the structure. I knew the book would begin in 1917, with the American entrance into World War I, because the creation of the draft and concomitant mass mobilization of American men into the armed forces created pressure to rethink the chaplaincy. More specifically, it set off decades of conflict and negotiation—within and between military officials, religious leaders, and concerned citizens—about the religious composition of the chaplaincy.

However, I had no idea how many chapters the narrative would need, where all the chapter breaks would be, or at what point the book would end. (These are, of course, inter-related questions.)

I didn’t have many answers, but I had a lot of ideas, thanks to a very productive dissertation defense that focused less on the dissertation as a product and more on its potential as a book. As a result, I stepped forward into the book process with a lot of suggestions to consider and questions to contemplate (aided by extraordinary notes graciously taken by legal historian Elizabeth Papp Kamali).

Because I had a 2-year postdoc at the Danforth Center on Religion and Politics at Washington University in St. Louis with very light teaching responsibilities, I had a lot of time to puzzle my way forward. I use “puzzle” deliberately because I spent much of my time between my May 2014 dissertation defense and May 2015 book proposal experimenting with different plans for structuring the book.

Throughout this process, I used a number of very low-tech tools.

First: conversations with colleagues and mentors. As I debated the appropriate endpoint, agonizing over what date or event made the most sense and wondering whether it was even possible to access sources close to the present, I spent a lot of time talking. Access to scholars who hadn't been part of my dissertation process offered fresh perspectives that challenged me--in good, productive ways. Many of these discussions were verbal thought experiments: what if I end in 1975 or 1988 or 2001? Is the book complete without Katcoff v. Marsh, Goldman v. Weinberger, or the War on Terror? The back-and-forth between my argument and my periodization helped clarify both.

Second: a whiteboard. When I arrived in St. Louis, I asked for a white board to hang in my office. For several months, I started each week by writing a new possible chapter outline on the board and contemplating it all week. Should I keep the 6 chapters of the dissertation? Expand to 9 to create three sections of three chapters each? Did I even want separate sections? This, too, was an experimental and iterative process. The first two chapters stayed stable. The middle chapters kept changing. The final chapters changed even more. If the outline seemed viable, I’d take a picture before erasing it. If I hated it, I just erased it and moved on. This created a low-stakes way to test out structure without substantially altering any prose.

By the end, I had a chapter outline that I felt worked on multiple levels: 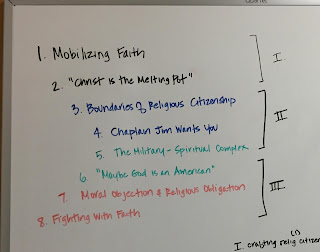 (2) The indentations marked a different set of pairs: chapters that mirrored one another in some fashion. The titles of chapter 1 and chapter 8 show this most explicitly. Chapter 1, “Mobilizing Faith,” focuses on how the chaplaincy begins to change as a result of the military using religion to pursue martial goals. Chapter 8, “Fighting with Fight,” highlights the legal, political, and religious conflicts that ensued—What are the boundaries of state management of religion? What religions are included and excluded? How do American politics of race and gender intersect in the chaplaincy? Thinking about mirrored processes helped me decide on the appropriate endpoint: the appointment of the first Muslim chaplain in 1994.

(3) The roman numerals indicated three major periods in which war prompted the chaplaincy to forge a new sensibility about American religion that percolated through civilian society. In turn, soldiers and civilians reacted, often claiming or seeking new rights and transforming religion and state anew.
These overlapping and braided structures organized Enlisting Faith, but only the last is explicitly mentioned in the book. This was intentional. As a historian, I needed to build the structures that undergirded and stabilized my argument. I therefore crafted numerous charts, tables, and diagrams to use as blueprints I could reference as I worked on the book. But as a writer, I didn't want exposed beams or visible cables to distract my reader, so I layered the narrative onto this foundation.


Third: sticky notes. As I worked on the book structure, I also started playing with the structure of individual chapters. Some were easier than others, but when I got stuck I borrowed a technique from the world of design-thinking: use post-its to map and remap the flow of ideas. Unfortunately I don’t have a picture, but at one point, I mapped chapter 5 on a wall of my office using different colors for different topics and post-its for sub-topics to work out an order that flowed effectively. Here too, the goal was to try out and rearrange ideas without needing to constantly shuffle paragraphs. Once I settled on an order that flowed, I went back to my prose.

I know there are tools like Scrivener that allow some of this experimentation on the screen. As a visual and tactile thinker, however, I found a whiteboard and markers, post-its and pens, to be quite effective.