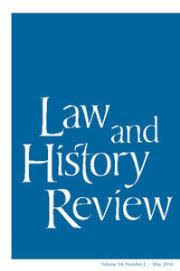 In This Issue
Gautham Rao

Affective Debts: Manumission by Grace and the Making of Gradual Emancipation Laws in Cuba, 1817–68
Adriana Chira

Russian Capitalism on Trial: The Case of the Jacks of Hearts
Sergei Antonov

“On the other hand the accused is a woman…”: Women and the Death Penalty in Post-Independence Ireland
Lynsey Black