Jones and Lash to Speak on Citizenship and the 14th Amendment

A panel discussion, Citizenship and the 14th Amendment, will take place on Friday, March 29, from 5:00pm to 6:30pm in Masters Hall 110 Mara Auditorium at Gettysburg College in Gettysburg, PA. The two speakers are Martha S. Jones, Society of Black Alumni Presidential Professor and Professor of History, The Johns Hopkins University, and Kurt Lash, E. Claiborne Robins Distinguished Chair in Law, University of Richmond School of Law: 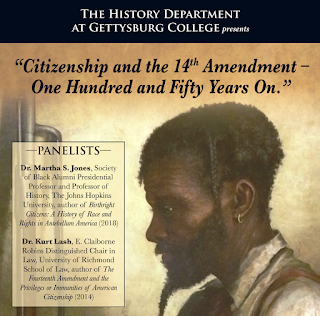 The 14th Amendment was forged in the chaos of the years which followed the Civil War,
and was ratified in 1868. It is also the most oddly-constructed of the Constitution's twenty-seven amendments, since it contains not one, but five unrelated provisions. It is also the place where the Constitution addressed a question it had ignored for seventy-one years – who is a citizen of the United States? In the process, the 14th Amendment introduced language into that definition about the “privileges or immunities” of those citizens and their “equal protection” which has been the fuel of judicial argument ever since. Join us for a sesquicentennial review of one of the Civil War era’s greatest legal triumphs, and one of its most puzzling mysteries.