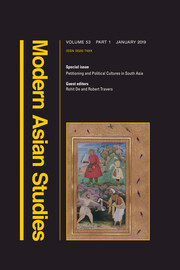 A special issue of Modern Asian Studies came out in January 2019 on the theme of "Petitioning and Political Cultures in South Asia." Rohit De (Yale University) and Robert Travers (Cornell University) are co-editors. Here's the Table of Contents from MAS 53:1: