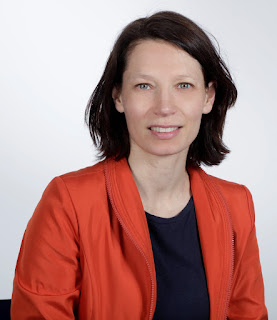 Today's Scholar Spotlight interview features Helle Vogt, University of Copenhagen. In our earlier interviews, we noted that only three of the fifty contributors to the recently published Oxford Handbook of European Legal History were women. Like Women Also Know History, this Scholar Spotlight series aims to showcase female scholars and their work. Its special focus is scholars of European legal history.

Helle Vogt is a professor at the University of Copenhagen (UCH).

Fields of interest: Scandinavian legal history, primarily medieval and early modern. Family, inheritance and penal law, as well as the connection between law and religion. Currently, I am also core scholar at the interdisciplinary Centre for Privacy Studies, a centre of excellence founded by the National Research Council. The Centre focuses on early modern privacy. The Centre’s focus is on how the notion of the private starts to be developed in the early modern period. My work in the Centre is two-fold. I participate in the case-team that works with Copenhagen, and I help my non-legal history colleagues work with legal sources.

Describe your career path. What led you to where you are today? I started as an historian and wanted to work at a museum, but after I finished my MA, I could only get a job as sale assistant. When I was offered a PhD-scholarship in legal history, I thought it would increase my chances of a museum job, but after 3 years at a law faculty, I was labelled a lawyer, and after a while, I decided to get the official qualifications as well. At the same time, I was given the responsibility for the mandatory course in legal history and was made assistant professor in 2007, 2 years later associate, and last year I got the chair.

What do you like the most about where you live and work? Copenhagen is a pleasant town to live in, and I agree with the basic principles of the Danish welfare state – most people are middle class, and things like health care and education (including university education) are free. I have a lot of freedom in my job, good opportunities to do interdisciplinary work, and not least, I have great colleagues at the faculty.

What projects are you currently working on? A textbook about Danish legal history in a European context for the mandatory BA course in legal history, an article about drunkenness and disorder in the Danish courts, and how the concept of privacy is used in the eighteenth-century Danish newspapers.

Have your interests evolved since finishing your studies? Yes, teaching 2000 years of legal history makes it very difficult not to want to get interested in a lot of different aspects of legal history, even property law, which I would never have thought possible ten years ago. However, the Danish laws from the middle ages have a special place in my heart, and one of the main reasons for translating them into English (Routledge, 2016) was to share these wonderful sources with my non-Nordic speaking colleagues.

What is the most fascinating thing you have ever found in your primary sources? In 2007 I was gathering material for a little article about how the Danish-Norwegian Lutheran state dealt with noble killers in the sixteenth century. A year after the Reformation (1536) wergeld was replaced with ‘a life for a life’ for all non-nobles. The courts, however, did not know how to deal with noble killers, and put them into the hands of the king. I was very surprised to find out that the king gave most of them the choice between losing their honour forever or going to Austria and joining the fight against the Turks. It was fascinating to see how the king managed to balance honour and religious atonement.
Posted by Mitra Sharafi at 12:30 AM