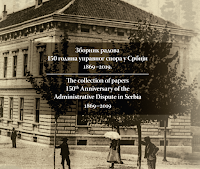 [We have the following announcement from Vuk Cucic of the University of Belgrade. DRE]

[Professor Cucic observes that the collection shows “how different administrative traditions (French, Austrian, German and Soviet) influenced judicial review in a small European country.”]
Posted by ernst at 12:30 AM