How do you find good cover art?

When I was a junior in high school, I did a slide presentation on the American Revolution. (This was 1975—Powerpoint was decades in the future.) I was convinced that documentarians played fast-and-loose in matching up images or film footage with their subject, and since I was having a hard time finding just the right images, I used this one to illustrate a generic Revolutionary War battle: 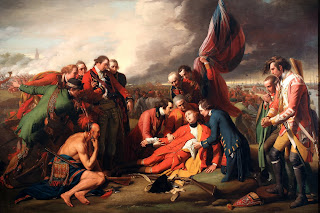 My history teacher pointed out—correctly—that this painting was “The Death of General Wolfe,” Benjamin West’s painting commemorating the 1759 Battle of the Plains of Abraham (Quebec) during the French and Indian War.  (Can we take a moment to praise the erudition of our public school teachers?) The memory of being thus called out still makes me feel sheepish.

Fast-forward 44 years and I was doing it again. This time, for my book cover on McCulloch v. Maryland, I was hoping to use this image. What could be more perfect: there is Daniel Webster, advocate for the Second Bank of the United States, standing before the bar of the Marshall Court.

The problem was twofold. First, it was Webster arguing the Dartmouth College case, not McCulloch. A near miss, to be sure, and much closer than my "Death of Wolfe" substitution: Dartmouth College was argued less than a year before McCulloch, the justices are the same, and--so Alison LaCroix tells me--there's William Wirt, Webter's co-counsel in both cases, seated just to the left of Webster.

The second problem was that the painting is actually owned by Dartmouth College, and apparently they will not give permission to use it if it is cropped—as it would have to have been to fit the book cover.

It would have been easy just to slap a John Marshall portrait on the cover, but I wanted to avoid a book cover consisting entirely of a Marshall portrait. Not only would it misleadingly signal "yet another Marshall biography," which my book is not, but it has been so done. 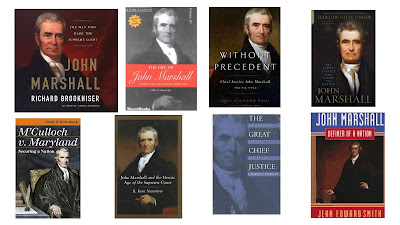 I was very fortunate that my editor at Oxford University Press both encouraged me to look for cover art and was amenable to considering my feedback on the cover design. He also expressed openness to a two-image cover, which is no small thing for an academic book, due to its extra expense. Another bit of good fortune was finding a portrait of John Marshall that somehow had not been used (as far as I could tell) on any of the numerous books with John Marshall on the cover.

But at this point, the luck ran out. I had somehow expected the miracle of internet image data bases to offer me copious and well-organized libraries of images. OUP gave me a head start with a suggested list of image databanks. Between these databanks, and Google, I figured I would be like the cultural stereotype of a bride combing through photos of wedding dresses—most would be tacky, many would be out of my price range, but they would all be relevant to the subject of “wedding,” and it would just be a matter of choosing the best one out of dozens of options.

Boy was I wrong. Hours of searching produced no more than ten even remotely pertinent images. And I mean remotely pertinent: for example, an early 19th century street scene of a boisterous crowd on election day under a large American flag, that signals “this book is about U.S. history!” Most disappointing of all was the Library of Congress image database, which as far as I could tell had more images of etched candy dishes than of Supreme Court scenes.

I got so desperate, I even seriously considered John Marshall postage stamps. 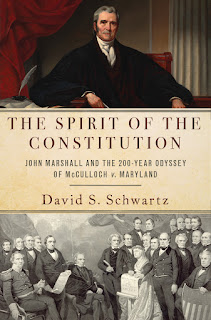 After hours of nearly fruitless searching, I suddenly remembered the American Heritage picture books and magazines of my youth. Here is an organization that must have a massive treasure trove of U.S. history-relevant images. They continue to put out a magazine, at least a web version, but my efforts to contact them about accessing their image collection were unavailing.

In the end, we complemented the Marshall portrait with a stylized etching from the LOC collection, entitled "Union," commemorating the Compromise of 1850. The Compromise itself is mentioned only in passing in the book, but the image foregrounds Henry Clay, John C. Calhoun, and Daniel Webster--all of whom figure prominently in the book-- together with an unfurled scroll labeled “Constitution of the United States.”
Relevant enough. I worried, though, that with the Marshall portrait, the cover showed a lot of dour-faced and statically-posed DWMs (dead white males). But but my friends assured me that my book was mostly about dead white males, so that was okay.

I came to like OUP’s cover design for my book quite a lot. But I still need to know: Historians, where do you find cover art?