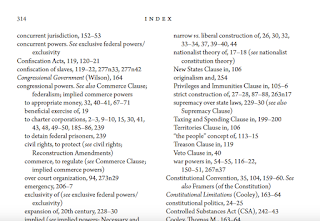 How many times have you been frustrated by a bad index in someone else’s book? You go back to a great secondary source and spend a frustrating half-hour or more trying to find a particular point you need. Or you pick up a tome that you don’t want or need to read cover-to-cover, but you can’t find the thing you know is in there somewhere. You turn to the index only to find that the person, place, or event is not indexed. Or it is there in the index—but has fifteen undifferentiated page references, and you have to go through each one to find the thing you want.
I didn’t want to be that author—the one who treats the index as a formality—and instead decided to try to make my book index one that I would find helpful as a reader. I wound up with what I consider a good index, as well as a learning experience.
The publisher treated the index in my book as the author’s responsibility. In theory, I could have supplied an index myself, but lacking experience and know-how, I decided instead to throw money at the problem. Free-lance indexers charge somewhere between $1,000 and $1,500 for a 250-ish page academic monograph. Rather than hiring my own indexer, I chose the path of least resistance and allowed the book production contractor to subcontract a free-lance indexer, with a bill ultimately sent to me for the work. The advantage, I figured, was that the indexer would be familiar with the publisher’s production process and the indexing would be folded into that process.
What happened next was something of a mixed blessing. The production contractor sent me a draft index with a short turnaround time, on the assumption that the index was in good shape and required only a few hours of proofing and tinkering. On the positive side, the indexer did a very good job producing a long list of main headings, including certain items—often, names of individuals—that I might not have thought to include but that I was ultimately glad to include. The indexer also cited to the paragraph numbers of the page proofs, which would be converted to page numbers by the end of the production process. This was extremely useful as the paragraph cites would not be thrown off by last-minute pagination changes. I also appreciated that the indexer made a real effort to create detailed subheadings rather than simply amassing a dozen or more undifferentiated page cites for main headings like “slavery.”

But the downside was that the subheadings needed a lot of revision. They were often worded in ways that would make little sense to specialists, or bore insufficient relation to my text, and at times they were a step above gibberish. In retrospect, I realized that it was unrealistic to expect an indexer to understand the book’s themes in sufficient detail, and to sufficiently master specialized terminology, to produce a useful, and indeed respectable, index.
I spent about 55 hours revising the index. But before gasping in fear and horror, hear me out. I found the experience worthwhile and far from tedious.
I quickly fell into a routine of doing word searches through my page proofs for all of the main index headings that were likely to need subheadings. To qualify for this treatment, the main heading had to be either an important concept or to have more than five page cites. (The latter criterion was suggested in the publisher’s indexing guide for authors.) As the author, I found it quick and easy to discern the context for the word or phrase in question and to come up with a subheading word or phrase that fit the book. The process, though highly repetitive, was absorbing and interesting, in a crossword puzzle/Sudoku kind of way.
But there was a more substantive payoff as well. The indexing process forced me to think hard about the book’s various themes and their interconnections, from the vantage point of terminology. This was different – fascinatingly so—from thinking about the book’s themes in writing the body text of the manuscript, organizing chapters, or writing chapter abstracts and jacket copy.
The most challenging aspect of the indexing process, for me, was trying to disentangle overlapping concepts that might warrant separate main index entries: for example, “race” and “slavery,” or “federal powers” and “Commerce Clause.” The key, I found, was not to disentangle them at all. Instead, I realized that I should embrace overlap and repetition, allowing myself to repeat page cites and subheadings while liberally sprinkling in “see also” references. After all, a reader might look to either “race” or “slavery” in the index’s main headings to find the discussion of “fugitive slave laws.”
The question I now have is what to do next time (hoping I have a second book in me). I can think of two options to improve on the indexing process I described above. One is to try to create the index from scratch myself, using Word or some indexing software to generate main headings. The other option is to hire the indexer to produce a list of main headings only. I would expect this to cost less money, guessing (but it is only a guess) that the subheadings take up 50% of the indexer’s time. Either way, I would plan to do the index subheadings myself.
Fifty-five hours sounds like a lot. But it is less daunting if you think about it as ten days to two weeks of steady work at the end of a long writing process. Having put your heart and soul into writing a book, you should take the time to have an extended conversation with it—which the index-writing process certainly is. Your book is worth it.