Temple on Legal Emotions in Blackstone 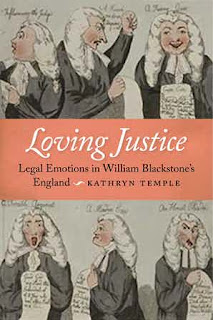 William Blackstone’s masterpiece, Commentaries on the Laws of England (1765–1769), famously took the “ungodly jumble” of English law and transformed it into an elegant and easily transportable four-volume summary. Soon after publication, the work became an international monument not only to English law, but to universal English concepts of justice and what Blackstone called “the immutable laws of good and evil.”

Most legal historians regard the Commentaries as a brilliant application of Enlightenment reasoning to English legal history. Loving Justice contends that Blackstone’s work extends beyond making sense of English law to invoke emotions such as desire, disgust, sadness, embarrassment, terror, tenderness, and happiness. By enlisting an affective aesthetics to represent English law as just, Blackstone created an evocative poetics of justice whose influence persists across the Western world. In doing so, he encouraged readers to feel as much as reason their way to justice.

Ultimately, Temple argues that the Commentaries offers a complex map of our affective relationship to juridical culture, one that illuminates both individual and communal understandings of our search for justice, and is crucial for understanding both justice and injustice today.


“There is significant interest in the writings of William Blackstone amongst scholars and practitioners in the legal domain, and Kathryn Temple sheds new light upon his legacy. But what makes this book especially fascinating is this re-imagining of the aesthetic and emotional world of eighteenth-century English law, and the re-viewing of texts in regards thereto. This is a superb work.” ~Robert Barsky, Professor of Law, Vanderbilt Law School

“In this first sustained close reading of Blackstone’s Commentaries as a work of high art and sensibility, Kathyrn Temple locates book and author in their eighteenth-century emotional context, while showing how they can still speak to us today.” ~Wilfrid Prest, author of William Blackstone: Law and Letters in the Eighteenth Century

“Kathryn Temple provides a unique multi-disciplinary perspective on English law in the eighteenth century by taking account of the emotions and aesthetics of Blackstone’s Commentaries. This learned and witty book is a must-read for anyone interested in the popular appeal of justice in all its complexity.” ~David Lemmings, ARC Centre for the History of Emotions, University of Adelaide