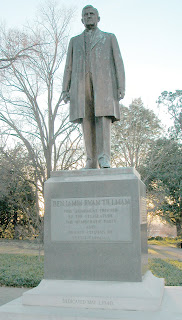 Just in time for the South Carolina primaries is a controversy about a statue of South Carolina politician (a symbol of the worst of Jim Crow for many), which is on the state house grounds. The story, from the South Carolina's The State newspaper is here (thanks to a pointer from feminist law prof Ann Bartow and one of the leading scholars of monument law).

Some want the statue removed:

“I just don’t think his statue should be on State House grounds,” said Rep. Todd Rutherford, D-Richland, noting Tillman for years made speeches about killing African-Americans who sought their rights.

Others would like to see a plaque that puts the statue into perspective:

“A plaque would stand a better chance of passage because it simply tells the truth,” said Rep. Joe Neal, D-Richland. “History is what it is, and there’s an argument that you can’t change it (by removing a statue). But what you can do is tell the truth.”

Among the many interesting issues these kinds of discussions raise are what meaning did the statue served to the people who put it up? Our friends at answers.com provided the image of the Tillman statue. You might notice that the writing on the base shows it was put up in 1940 by the "legislature, the Democratic Party, and private citizens of the state of South Carolina." Inscriptions are sometimes as useful in interpreting a monument as the images on it.

Posted by Alfred Brophy at 9:40 AM